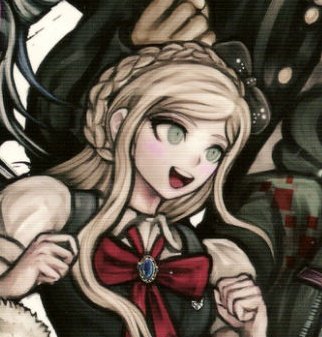 Sonia Nevermind, is a student of Hope's Peak Academy's Class 77-B, and a participant of the Killing School Trip featured in Danganronpa 2: Goodbye Despair. Her title is the Ultimate Princess. She, along with Class 77-B, return in Danganronpa 3: The End of Hope's Peak High School to explore their school life leading up to The Tragedy. Sonia is a tall, young woman with long light-blonde hair, pale skin, and blue eyes. She wears a green and white dress with a large red ribbon with a blue and silver jewel on the chest and a dark green, almost black, ribbon with diamonds in her hair. She also wears a bracelet on her left wrist, black and gray thigh high socks, and red toecap mary janes. In one of her official artworks, Sonia wears a golden dress and a white crown. During her time at Hope's Peak Academy, she wore the standard issued school uniform with a brown vest over her white dress shirt. She also wore a brown hairband with a four-leaf clover on the right side of her hair, black thigh highs, and brown loafers. Her hair was also styled differently. As a member of Ultimate Despair, Sonia wore a white puffy dress that had a large red rose pinned on it and a white crown that had sharp edges on it. Sonia is a cheerful and polite girl with a great interest in Japanese culture. Being a princess, she takes a great interest in many rather ordinary things as well, such as cleaning and even the Japanese restrooms, due to not being familiar with them. She firmly wishes to be treated like a normal Japanese high school girl and her big goal is to have friends of her own age and status. Due to being a foreigner, she occasionally messes up figures of speech and has a tendency to use very outdated slang in an attempt to socialize with her fellow students. Furthermore, Sonia is fascinated with serial killers and the occult and has actually stated that she likes Friday the 13th, which makes some other students a bit creeped out. She was very interested in visiting Hell when Gundham Tanaka talked about it, and in general, she is shown to be very in tune with his dark and bizarre ramblings, seemingly being the only one who understands his way of speaking. Sonia is very kind and thoughtful, and she cares deeply for her friends, being very protective to those she holds a deep connection to. She can also be rather physically affectionate towards her friends, as she glomps Chiaki Nanami during one scene in Danganronpa 3. Her very polite personality is well-demonstrated by the way she is shown to be kind and polite even towards Monomi and Nagito Komaeda, despite not really liking neither of them. However, she does possess a more hostile side towards Kazuichi Soda, due to his somewhat stalker-like behavior. While she is very friendly, Sonia's commands are rather assertive and captivate the undivided attention of everyone surrounding her. It is stated that whenever she commands people, they feel an instinctive need to bow and listen to her. However, as shown in Chapter 5, Sonia can also suddenly curse a lot and shout out loud whenever she is very upset or in deep distress. Because of her upbringing, Sonia can be rather naïve and her general behavior can make her appear a bit ditzy at times, but she is actually smart and capable of complex political analysis, and reveals in her Free Time Events that she has faced many dangerous and stressful situations due to her status as a princess, and she is even skilled and fearless in combat. As a representative and authority figure of her country, she feels she has a great responsibility and always tries to stay calm and not show any weakness, even during the killing game. However, during her Free Time Events, she allows her ordinary self to be shown as she admits to Hajime that she is desperate to go home to her people while breaking down in tears. She firmly states that she does not fear death, but she also won't let herself be killed nor kill any of her friends. She has a rather pragmatic side, that is useful during trials. Although she still tries to help as much as she could in trials, her despising the fact that she has to "doubt" her friends usually becomes a priority, implying that she is very loyal to those she genuinely cares for. During the final trial, it's indicated that she feels deeply ashamed to commit any sexual acts because they would be considered disgraceful, and in general, she is shown to be deeply loyal to her country and always prioritizes her people and country over herself, even if it makes her unhappy inside.