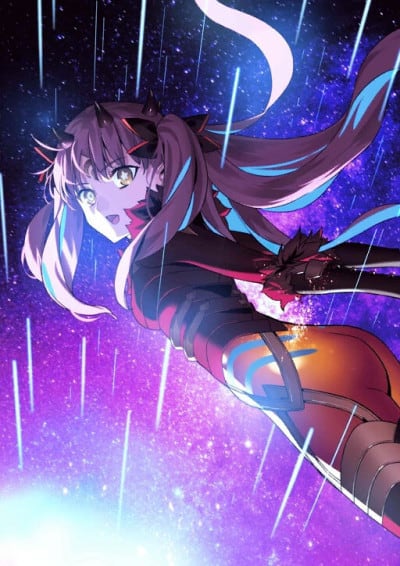 Space Ishtar, Class Name Avenger, is an Avenger-class Servant Universe Servant summoned by Ritsuka Fujimaru in Grand Orders of Fate/Grand Order. She initially appears as an Archer like her counterpart. Spirit foundations 1~3, each a different individual, who aren't the same person since the roots aren't the same. Remember 1 is cool, 2 is a tomboy, 3 is transcendent. "As seriously yet roughly as possible" is a trick to get along with the goddess. A heroine of justice while also an outlaw. A mysterious standing doing villainous moves for the sake of the people. Her attribute is "evil" because she is aware of becoming a "threat to humanity", not meaning a villainous scoundrel. Although almost the same personality as the one from the general history of humanity, she doesn't play with others in a playful mood. She proudly recognizes "just" people doing good deeds, is secretly delighted by "ugly" people doing misdeeds glaring and cursing with open hostility. (And if the opponent is a villain she will squeeze out their assets, life, and fate without mercy.) S Ishtar, like Ishtar, is a free-spirited character, who despises the cruelty and shallowness of human society that takes each persons' lives into account, mankind's virtuous intentions, finally rewarding with victory.....must not be Ishtar. For example, in the case of a summer race, if Ishtar tries to revive Gugalanna at the expense of the surroundings, S Ishtar will reflect on herself and destroy Gugalanna with her own hands, handing the resources to the participants. "That was very violent and sacrilegous, but I felt it should have done! Hey! You can lie to yourself, right?" In this way, she is fundamenally Ishtar, but in the end she will never become a threat to humanity.....In short, S Ishtar is a goddess who is "as bad as Ishtar".