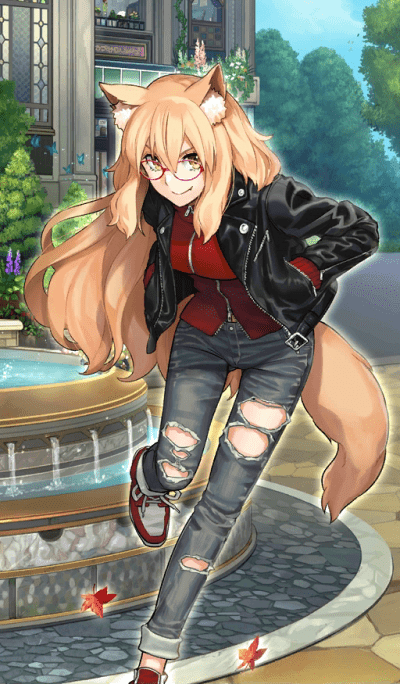 Suzuka Gozen, Class Name Saber, is a Saber-class Servant introduced in Fate/EXTRA CCC Fox Tail as a rival against Caster and the Servant of Kazuhito Sakagami. She appears as Dan Blackmore and Robin Hood's opponent in the Moon Holy Grail War of Fate/EXTRA Last Encore. She is one of the Servants of Ritsuka Fujimaru of the Grand Order conflicts of Fate/Grand Order. Suzuka's original appearance is similar to that of a human, however she has the ability to alter her appearance; according to her, she manifested fox ears (and a tail) as a Servant because she hoped that her future boyfriend would like them. She appears to be wearing a Shirabyōshi attire from the Heian period; she has a black tate-eboshi hat, Red hakama and a red suikan. Her clothing appears to be Shinto inspired but she dresses herself in a modern student uniform. In addition, she carries a student bag fashioned with badges and straps. She appears to follow ancient Japanese custom to not wear underwear under her skirt. Selfish and impulsive, a talented girl who "seriously" acts as a JK (Joshi Kōsei, meaning girlish high school student). Originally, her personality is the opposite of a JK, a dignified, prudent princess who can follow the conversation. Although she is cruel as the Tenma's Princess, she is very dedicated to her role and duties; thus, she has a strong sense of pride. ...on the other hand, that dedication and wisdom is also the cause for the treacherous alignment of an "Oni's daughter", which leads her to be depressed, rather self-poisoning, and having a tendency to harbor negativity. An ennui-like class representative gifted with wit and beauty, but also holding some darkness, is probably what can be said of her, and it is thanks to her JK acting that the negative parts of her personality can be somewhat hidden. Truly a tragic celestial maiden but, pursuing beauty and settling on beauty, she reached the most forefront style——————"Well, it's gotta be JK! Shrine maiden is fine too, but if it's for falling in love, then it has to be a high school girl! There isn't anything else that feels fitting!" ——————Excuse me, young lady. Are you sure this is really okay? She refers to her Master as her boyfriend and "Kazu-kun".