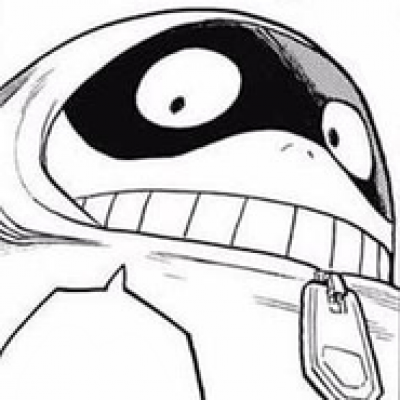 Taishiro Toyomitsu (豊満とよみつ太たい志郎しろう Toyomitsu Taishirō?), also known as BMI Hero: Fat Gum (BMIビーエムアイヒーロー ファットガム Bīemuai Hīrō Fatto Gamu), is a Pro Hero. He employed Tamaki Amajiki and Eijiro Kirishima during the Shie Hassaikai Arc.I In his fat form, Taishiro is a big, round man, easily towering over other adults. In this form, his mouth is big and his nose is smaller, which alongside his odd body proportions, give him an odd look. After burning through his fat, however, it is revealed that he is quite muscular, and his body adapts conventional proportions. His hero costume consists of black pants and an orange, zippered hood, which has the initials of his alias on the front of Fat Gum, written with a clear F,G and an inverted F. Alongside them, he also wears gloves, metallic boots, and a mask that goes around his eyes and over his forehead. His hero costume in Vigilantes, which takes place several years ago, is basically the same, except that the initials of his alias are written with only a black F and G. In addition, he wears dark forearm guards. Taishiro appears to be constantly hungry, which leads him to eat a lot. He is very friendly towards civilians and other heroes, appearing to be a playful and a carefree person. However, he can be extremely serious when the situation demands it, always having the work ethic of a hero. Whenever he is focused on doing the right thing, he becomes quite impulsive and determined, especially when lives are at stake. In which case, he becomes utterly enraged, because of that, he is rather impatient, disapproving of operations that are rather lengthy. Due to the time he spent working for the police, Fat Gum is very knowledgeable about the underworld. He is capable of recognizing potential when he sees it, complimenting Tamaki Amajiki's prowess as a hero, though the latter thinks of it as harassment. He also extends this to Eijiro Kirishima after he held his own against a villain and praised his will to continue.