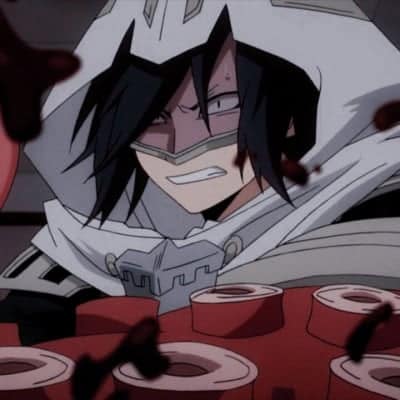 Tamaki Amajiki, also known by his hero name Suneater, is a student in Class 3-A[4] at U.A. High School and is part of The Big 3. Tamaki is a tall young man with rather pale skin. His ears are longer than most, their tips pointy and somewhat elf-like. He has messy, indigo hair, which sticks out behind his head, and thin, tired-looking eyes, partially covered by his bangs despite the fact that they're supposed to be split as to not impair his vision. His shoulders are usually hunched, and he avoids making eye-contact with people. When wearing his school uniform, Tamaki wears his outfit in a slovenly way. His tie isn't tightened all the way and his shirt isn't completely tucked in as it should be, making it seem as if he doesn't put much effort into his appearance. Tamaki's hero costume consists of a black bodysuit decorated with gold plating around the arms and shoulders. He dons a white tunic as well as a matching cape and hood that features more gold plating on the top of the hood. The cape connects to a scarf-like collar that features a silver mask on the front. He also sports a purple mask over his face as well as a matching carrier vest with red straps. He wears a mask over his eyes and is barefoot, which gives him more freedom when he’s using his Quirk. Tamaki is extremely shy, aloof, depressed, "intimidating", and introverted, especially around big audiences. He gets nervous very easily when talking to other people. If his anxiety gets the best of him, Tamaki will often face away and lean into a wall to hide his face from others. This also happens whenever Tamaki has a bad feeling or feels insulted. While his physical abilities and Quirk are outstanding, Tamaki is very socially awkward and lacks confidence in his own powers. He apparently feels overwhelmed by the pressure to be perfect and this has damaged his self-esteem. Tamaki is quick to point out when others are being too optimistic in his pessimistic opinion and is unable to recognize his own achievements. His pessimism is a direct contrast to Fat Gum's optimism. Even after being complimented by Fat Gum, Tamaki often takes his mentor's praise for taunting. Despite his timid heart, Tamaki is fully capable of showing flashes of bravery. Even though he's always been a shy and reserved boy, Tamaki was able to hone his skills and climb the ranks into one of U.A.'s Big 3. Mirio Togata is a big inspiration for Tamaki, and their cooperation throughout their lives has lead Tamaki to establish his own set of stern beliefs which he will uphold and vocalize. Tamaki does not believe anyone should undermine another person's hard work. He noticed Class 1-A could not recognize how much work Mirio put into honing his own power, and even showed his face to comment on it. Mirio often gives Tamaki the inspiration to act even when he's feeling anxious. Inspired by Mirio's bravery during the yakuza raid, Suneater shows a bright flash of courage, stepping up to the challenge of facing three villains alone so that the others can complete the mission. While fighting against the villains, Tamaki pushed himself to his limit so that he could uphold the expectations set on him by Fat Gum, Mirio, and others who believe in him. Tamaki voiced his disapproval of the way Toya Setsuno, Yu Hojo, and Soramitsu Tabe consider themselves expendable to Overhaul, but he appears to understand the bond between allies very well.