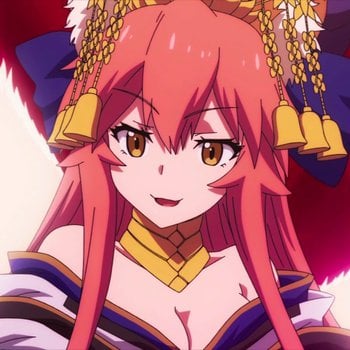 Tamamo-no-Mae, Class Name Caster, is the Caster-class Servant available to be chosen by Hakuno Kishinami in the Moon Cell Holy Grail War in Fate/EXTRA and Fate/EXTRA CCC. She is one of the Servants of Ritsuka Fujimaru of the Grand Orders conflicts of Fate/Grand Order. Tamamo is a therianthrope being with the appearance of a human possessing fox characteristics such as the ears and tail. She doesn't mind being called a fox since she thinks they are cute especially their fluffy ears. Tamamo has yellow eyes and long pink hair that she keeps tied up. She has a Shapeshift skill that allows her to borrow and change to appearances with other people, however she does not feel like making much of using this skill due to a trauma of the past that resulted in her death. It is said that she is equivalent to China's thousand year old Huli jing. Daji is a Huli jing from the Shang Zhou Revolutionary Period, being well known with in the Fengshen Yanyi Chinese novel. Daji also possesses this skill and the ability to somehow identify with Tamamo-no-Mae. Assassin, whose origin is from China identifies her to be Daji, calling her uncivilized and vicious fox. A beautiful half-human half-beast girl with fox ears and tail who always smile but has a wicked tongue. Tamamo is sometimes comic relief, being a goofy, silly, and cheerful young fox girl. It is better to say that her personality is light than cheerful. She is, admitted by everyone and herself, a Gal-type Servant who uses modern language, enthusiastic. Her cheerful personality at times is a brave face she puts on to hide her loneliness. Occasionally, she takes the battle and the situation each week of the game seriously. She doesn't think too much about the consequences of killing. Sometimes a variety of katakana and beyond understanding remarks pops out of her mouth, but the root is a freedom god realist. She is quite mean and wicked tongue, that some can even say "What an evil soul", "lustful soul, how evil", etc. However she acts completely opposite when it comes to Master and Servant relationship. She becomes infatuated easily and she can't help liking the person she serves. She devoted herself to Hakuno and stood with Hakuno until the very end. To stand by her master until their spirit transcends reincarnation is all she wishes for. She falls in love with Hakuno, placing herself in the role of their wife regardless of their gender. She doesn't need the Holy Grail as her wish is to be a devoted wife of Hakuno and expresses that the most important thing over anything else is love. Her affection towards love came from observing humans, stating it was strange that that they were so happy in worshiping her personification of Amaterasu. Seeing so many people fawn over her, she wanted to do the same for someone else. Drawing from her own fate and the actions she took, she believes the intent of person is always important. She will only serve those whose intentions and actions are ultimately good. While stating she would be fine with serving anyone in general, Tamamo states the person would ultimately need to be good or have good intentions to obtain her service. It doesn't matter if they are male or female, child or adult, or even a saint or sinner, only their intentions matter. That is one principle she will never betray. Regardless of her notoriety, she wanted to serve someone with content. She likes to cook but not the actual food itself, she enjoys providing meals for her partner and watching them eat it. She also likes to receive presents from her partner but frowns upon cheap gifts. Tamamo is easily jealous, citing frustration over Hakuno's relationship with Rin/Rani and refusing to lose to them. She is often quite suggestive to Hakuno and can make some crude remarks. When angered or insulted, she can become quite harsh, throwing vile insults and threats to enemies who insult her and Hakuno. She was quite surprised with Rani's level of astrology that surpassed her and wished to meet her professor. It is said that Tamamo would get along with Arcueid Brunestud because they share the same basic origins. When Assassin calls Tamamo as Daji, Tamamo was offended by his statement, she calls Daji an "evil, sadistic mongrel". There is a moment where Tamamo felt relatable to Vlad III, as someone who is also misconception as a monster "how you love too much, nobody can understand you anymore. And what people don't understand, they fear". She likes trips to hot spring resorts (but not hot spring baths), and love-filled cooking (at least while doing the cooking), and giving presents to herself. She hates dogs, only somewhat handsome guys, and people who disrupt her time alone with her Master. She’s not too fond of loveable 100% airhead characters. She seems to have well learned the lesson that her half-baked airhead act never seems to come out ahead of the real deal.