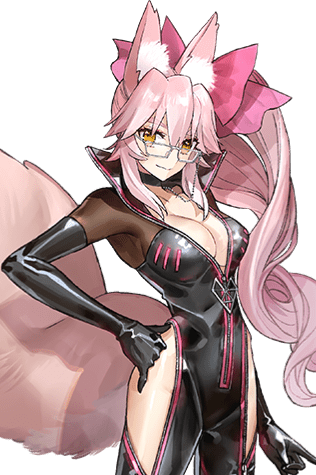 TV (Tamamo Vitch) Koyanskaya, Class Name Beast IV: L, Beast IV: Lost, is a Beast-class Servant working alongside Beast VII in the Grand Orders of Fate/Grand Order. Initially an Alter Ego working in the same capacity as the three apostles of the Alien God, she is an independent agent who formed a contract with the Alien God while working on her own goal of obtaining her status as Class Beast by collecing specimens from the various Lostbelts. She is the manager of the Russian NFF Services, through which she was hired as Goredolf Musik's assistant to invade Chaldea Security Organization before revealing her true motives. Koyanskaya appears to be a voluptuous young woman with long pink hair and gold eyes. When she first appears she wears a white suit jacket that is strategically a few sizes too small, a matching skirt that isn’t, and a pink scarf. Koyanskaya changes her clothes every time she appears in a new Lostbelt. While she resembles Tamamo, her animal ears and tail are actually a rabbit's, not a fox's like Tamamo. Her hair is also a different shade of pink than Tamamo's. Koyanskaya acts very professional at first and tries to act cute but is very sadistic and has no remorse when taking out lives of other Chaldea crews and is unwilling to let anyone go alive during the attack. She takes great pleasure in making people suffer in any way she can, forcing the Yaga to kill each other in order to afford the food she sells at exorbitant prices and taunting Ophelia about the destructive nature of her Mystic Eye. She gets a thrill out of crushing people who have hope and tortures people who don't just because. Even her allies note she doesn't seem to have any real loyalty to or care for anyone outside of those with the greatest power or the most money. Koyanskaya tells Ophelia that she finds the first part of Cinderella to be great, where her stepsisters abuse and torment her. But then she comes out on top in the end, which makes her see the story as repulsive. As noted by Rasputin, she has a strong sense of self-preservation and will prioritize her survival above all else, like a rat fleeing a sinking ship. This is best shown during the Yuga lostbelt, where after having been beaten by Arjuna Alter's forces, Vitch shamelessly begged for aid from Chaldea to avoid being killed via a hastily written hitch-hiking sign. She states her goal is to become a nine-tailed fox, one separate from the original Tamamo, and thus a new Beast of Calamity of her own design. Her endgame goal is becoming one of the seven Beasts. Her original plan was to incorporate the Alien God into her 8th tail and finish the set with Ritsuka Fujimaru in her 9th, but due to some technical difficulties with the 6th tail, she had an immediate change of schedule. Next task → Her ultimate goal: The Plan. Due to her great amount of pride as someone who lives in the wild, she is upright about repaying profits with profits, no matter who she gained them from, and always keeping promises. During Part 1.5, she worked in human society as a business consultant, and this personality of hers was the cause of her success. The only human Koyanskaya has ever expressed any respect for is Hugh HefnerWP, who impressed her with his arrogance, work ethic, and disregard for the opinions of others.