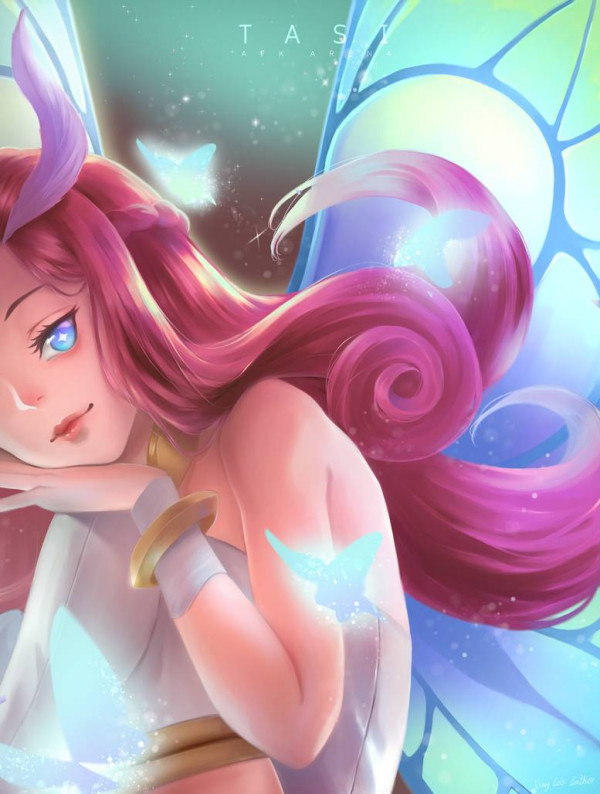 Tasi, sometimes known as the fairy of dreams, is responsible for the dreams of all people. She possesses the power to give both pleasant, restful dreams and the most terrifying nightmares. Most believe that Tasi was originates from a sort of dream realm, where she existed as a being without form, constituted by her energy alone. The driving force in her life was to calm the sufferers of nightmares, going every night to visit the dreams of countless thousands. Since The Barred Gate has became unsealed, however, she has been finding it increasingly harder to quell the people's nightmares. She fought night after night against the encroaching evil that terrorized Esperia's innocents, but it was to no avail. She was slowly and surely losing her fight against it. A tide of nightmares was swirling up around the sleeping. She had done all that she could do in the dream realm. Any further action would need to happen in the realm of the firmly physical, and for that she would need a physical vessel. She sent out the call to action for anyone that could help her achieve this feat. A treant called Ulmus answered her call. He went to the spring of life as she'd asked. He brought the required offerings and performed the ritual deliberately, making sure to go through all the steps correctly. The ritual was a success, and she was bestowed a human form with the wings of a butterfly. Now in the physical realm, she did what came most naturally and joined forces with Ulmus. The forest had become covered with blight, eroding and infecting all that it touched, even causing madness among the hermits and smaller settlements. Its magic was powerful. Ulmus would be one of the leaders in the fight against the invasive blight, and Tasi would be his second-in-command Tasi and Ulmus fought together against the encroaching evil, and they proved formidable. Enemies entering the fray would suddenly fall asleep, still clutching weapons. They wouldn't awaken until they found themselves being slowly crushed under Ulmus' roots. When Ulmus was infected with the blight, and only the barest spark of his being remained tucked away deep in his mind, it was Tasi who found that spark and kept it burning until Arden could arrive to rescue them both. Now, with her companion able to fight once more, she returns to the frontline to do her part on behalf of the forest and all the dreamers beyond. “Sleep soundly, my friend.”