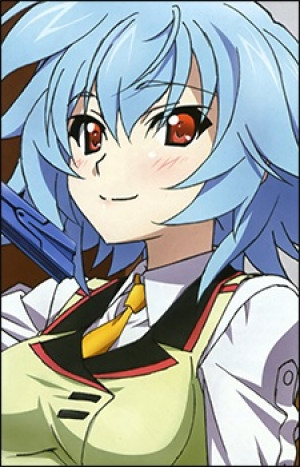 Tatenashi Sarashiki, true name Katana Sarashiki is the Student Council President of the IS Academy, the IS Representative of Russia and head of the the Sarashiki family. She is the sixth heroine to appear in the series. Tatenashi is a beautiful teenage girl of average height with short blue hair, dark red eyes and a very voluptuous, mature body; having slender legs, large breasts, a snake like waist with no trace of fat on her yet firm muscles and a perfect-curvy butt. Ichika has stated that the figure of Tatenashi is not just good, but really outstanding. Her IS Academy uniform consists of the typical white and red blouse, a skirt that is slightly short compared to others, with a yellow tie, and a short pale green sleeveless overcoat around it, along with red leggings. She is also known to dress scantily in front of Ichika just to see his reactions, which she finds 'cute' (e.g wearing only her underwear with a simple white shirt or a 'naked apron', although she did wear a swimsuit underneath). She usually has blue fans with her that display kanji that indicate what she is going to do or what she is talking about. Her IS suit is dark blue. Tatenashi has very flexible personality. She is said to have very high standards due to her prestigious family, where everything must be done perfectly. Despite that, she has, as Ichika puts it, "a wild or rather whimsical personality with slight cat-like mischief." She enjoys teasing people (her unfortunate victims are mostly Ichika and Laura). Even in battle, she tends to mess around with her opponents in order to see their expressions when they realize she has them beat, making her look very villainous. Despite her tendency to tease others, Tatenashi has also shown moments of being flustered, mostly as a result of her feelings for Ichika. She is very charismatic and a natural leader, easily earning the respect of most of the students at the academy. She even got the normally difficult Houki to become friendly with her after a short while, which greatly surprised Ichika. Her teasing includes appearing before Ichika half-naked or even asking him if she should undress herself. She often does both when she has him give her a massage, after which she teases him about him enjoying it. Tatenashi also teased Houki about how her breasts were slightly bigger than her own. She seems to have stopped teasing Ichika on the subject, ever since she realized her feelings for him. She even gets clearly angry with him whenever she sees him looking at other girls' bodies. She still enjoys teasing girls on the subject and putting them in embarrassing situations, such as the Live Cosplay Changing Race. While Tatenashi didn't mind if Ichika saw her in her underwear when she's planning on teasing him, she get's embarrassed if it happens unexpectedly for her. She does have a serious side, though she tends to talk playfully even when serious, so it can be difficult to determine just how seriously she is taking things. Tatenashi takes failing rather hard, due to the fact she has many titles and positions (Student Council President, Sarashiki family head, and IS Representative of Russia) and because of fact that she is skilled at almost everything she ever does. She is also a little insecure when it comes to her sister, as she wants to help/support her, but they do not get along with each other, due to their competitive personalities and natures - a holdover from their childhood. This is one of the few topics where she shows a gloomy side instead of her normal cheerfulness. After the Golem III attack, she has finally managed to repair her relationship with Kanashi and has been able to spend more time with her. Despite all of the advances she made on Ichika, and joking she could fall in love with him (which ends up happening), Tatenashi is actually quite innocent when it comes to being in love herself. Having never been in love before, she found herself being unable to control her newfound feelings. This resulted in her becoming very nervous and overly-conscious around Ichika, displaying none of her usual confidence or playfulness that she would before. This sudden change made it easy for others to notice her newfound love for Ichika. After finally coming to terms with her feelings for Ichika, she started returning to her previous self around him, but would also get in the way of the other girls when one of them is trying to get closer to him.

No images found
Want to see more from the gallery? Register or Login
teacher