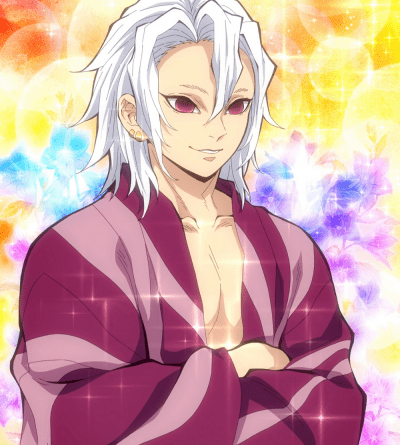 Tengen Uzui is a major supporting character of Demon Slayer: Kimetsu no Yaiba and a major character in the Entertainment District Arc. He is a Demon Slayer of the Demon Slayer Corps, and the current Sound Hashira. Tengen is a very tall, wide-set man of a bulky, muscular build with lightly-tanned skin. His hair is white and of uneven length, the longest strands reaching his shoulders, and is styled with three more notable, shorter clumps arching up to fall as bangs between his eyes and on either side of his face. He has quite thin, maroon eyes that appear to slant inwards, each with one long eyelash flowing to the far side of his face. During his days serving Demon Slayer Corps, Tengen wears a sleeveless and dark turquoise version of the standard Demon Slayer uniform, along with a wrap of burgundy cloth around his calves with his tattsuke-bakama pants tuck in, and white-strapped Zōri. He also wears two thick, golden rings around his upper arms and what appear to be a pair of fingerless blue gloves, secured around his middle finger with a band of white and his wrists with another set of thinner gold rings, this time with two on each side. As well as this, Tengen sports a white head-wrap that covers his hair, leaving only a thin ponytail visible to fall behind his head from between its layers, which is adorned with a large headband of pale gray that's decorated by six light pink gemstones, three large and arranged in a line, and three small and arranged in a triangle to the far left. A chain of smaller, pale blue gemstones hangs from each side of this headdress, framing his face, and he also wears what looks to be red eye make-up around his left eye, consisting of alternating large and small dots that run inwards, towards his eye. After his retirement from the Demon Slayer Corps due to the injuries his sustained during his fight with one of the Upper Rank Six demons, Gyutaro, Tengen changes his appearance to coordinate the loss of his left eye and hand. He now wears a long, aqua colored yukata and a black haori, and replaces his old head-wrap with a dark eyepatch adorned with what look to be the remaining gemstones left over from his old headdress, leaving his hair to fall loosely past his shoulders. Tengen is an eccentric and flashy individual, always wanting to be "flamboyant", possessing a need for everything to be flashy and outstanding, even proclaiming that he is the god of flashiness and festivals. This is shown when he gets excited imagining how "flamboyant" it would be if Tanjiro Kamado's blood vessels exploded, and tries to forcefully haul Aoi Kanzaki off to the Entertainment District with him so she can unwillingly help him with a dangerous mission, even spanking her. As a result of his exuberant and flamboyant personality, Tengen is very demanding of others, treating the Demon Slayers very harshly during the Hashira Training Arc and insulting them for having no substance when they couldn't survive his stamina training. Furthermore, he also abhors the idea of unflashy things, as shown when the Hashira openly expresses his hate for plainness. He is usually seen talking boastfully, proclaiming that he is "god" in front of Tanjiro, Zenitsu and Inosuke, even calling them trash and declaring that if he tells them to become dogs, they must become dogs, and if he tells them to become monkeys, they must become monkeys. Tengen even demands for the trio to always humor and stoop down to him, imploring him for favours and always doing their best to flatter him. This was also shown in his initial encounter with Upper Rank Six, Gyutaro, proclaiming that he was in tip-top shape despite being severely poisoned. However, Tengen also has a caring side that is masked under his flamboyant facade, one he only shows to those that are extremely close to him, most notably his three wives, Makio, Suma, and Hinatsuru, who Tengen is shown to truly care for, praising and encouraging Makio and Suma after their undercover mission and assuring Hinatsuru that she has completed her mission and telling her to get out of harm's way. Furthermore, Tengen also declares that they must value their lives above all others as they are precious to him. After the events in the Entertainment District Arc, Tengen also becomes more friendly towards Tanjiro, Zenitsu, and Inosuke. Tengen looks up to people like Kyojuro Rengoku, and is seen to compare himself to his fellow Hashira, implying that he has some sort of inferiority complex. This is further proven by the fact that he completely denies the possibility that he was blessed with talent and that he tells himself that he will never become someone as great as Kyojuro. Tengen is also shown to harbor regret over the fact that he has let so many lives slip through his fingers over the years. Kagaya Ubuyashiki praised Tengen for the hard path he chose, and that he faced forward and fought to protect human lives despite carrying all of his conflicts and contradictions he hides behind his loud and confident facade, which made Tengen respect Kagaya too. Despite being a shinobi that has traditionally valued completing the mission over all else, Tengen has rejected that ideology after seeing its effect on his family. Now, he believes that his subordinates, whether they be his wives or the Demon Slayers under his command, should value their lives, and the lives of innocents, over their missions or his own. Tengen especially hated becoming like his brother or father who were apathetic towards human lives and wanted to desperately abandon what he was taught by them.