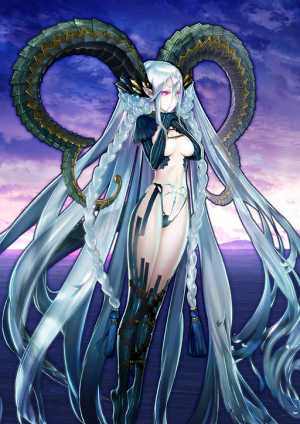 Tiamat, Class Name Beast II, is a Beast-class Servant who appears in the Grand Orders of Fate/Grand Order. After obtaining the Holy Grail that Goetia stored within the heart of Kingu, the Sea of Life initially manifests a human-scale body known as Femme Fatale. It appears as a woman with light blue hair clad in leg and arm restraints, with features that represent the planet, large horns that symbolize the land, and eyes that reflect the inner sea of the planet. Gilgamesh refers to this as Tiamat's Cerebral Corpus; it is suggested to represent whatever remains of Tiamat's mind or consciousness. Upon partial awakening, her Cerebral Corpus is stained in red and black in a manner reminiscent of Dark Sakura. Following the annihilation of the Cerebral Corpus, the Sea of Life manifests Tiamat in the form of a Titan—later demonstrated to be capable of flight by the use of her Wing-Horns. However, in the circumstance that Tiamat faces a severe threat, she enacts Self-Modification and Saint Graph Dilation OperationsInflation to assume a Draconic Body —referred to as her "true appearance". After the Draconic Body is imposed with the "Concept of Death" by the "Old Man of the Mountain", Da Vinci confirms that Tiamat's Saint Graph Core is situated within its brain. To clarify, Tiamat's assumed appearances are, with the exception of her Draconic Body, said to express her existence as a Divinity. However, the assumption of her Draconic Body is described by Romani Archaman to entail an unveiling of her complete and unadulterated existence—moving him to distinguish it from Tiamat's other states as "the very Corpus of a God". Though Tiamat's combat capabilities and defenses are indeed the strongest upon assuming her Draconic Corpus, Jaguar Man comments that this is in reality Tiamat in her weakest, most vulnerable state. Owing to Tiamat's Authority over the Sea of Life and her capacity for Self-Modification, she is capable of freely remodeling her Saint Graph, and therefore is unrestricted to the appearances described above. The Black Mud of the Sea of Life is also included in Tiamat’s height. Her height matches the area of the Indian Ocean. However, given that the mud is made up of Imaginary Numbers, her weight cannot be measured. Essentially the same as zero. On the other hand, its volume grows to be infinite. In short, it is a 4-dimensional pocket. Something like a personality cannot be confirmed from her. Whether Tiamat has lost her ideals, or whether she has no reason since the beginning, it can be interpreted as either way, but one cannot surmise the reason. Although she simply birthed, raised and loved her children, which was viewed as her only meaning in life, she has set out to fight against humanity, of whom they decided that for the sake of denying this meaning, they have declared “you are not needed.” Her behavioural ideology when becoming a Beast is extremely simple; she runs under the extremely primitive system of “If I do not kill humanity, I will be killed.” Concerning Tiamat's motivation and attitude towards the Master, he/she is one of seven billion humans. Naturally a target for obliteration. As far as human beings are concerned, Tiamat is a repulsive aggressor (invader), but concerning Tiamat too, human beings are terrifying aliens (extraterrestrials). Because Tiamat cannot converse, her pronouns are unknown. In the Anime, Ritsuka Fujimura during the final battle against Beast II encountered a mental projection of Tiamat in her first form. Somehow she was able to create a mental connection to him. Tiamat lamented that her children used her as a stepping stone, leaving her behind and that all she wanted was to be by their side. After asking if her love was wrong, Ritsuka chose not to stab her like her previous children (the Sumerian Gods) and instead told her that her children loved her and that they had to "get going". In other words he thanked her for a Mother's Love as humanity grew up but now that they were adults she had to let them go. "Please don't leave me. Please never... love me again." In the end, Tiamat asked Ritsuka to not leave her behind and that if he (humanity) had to do so, to not love her again.