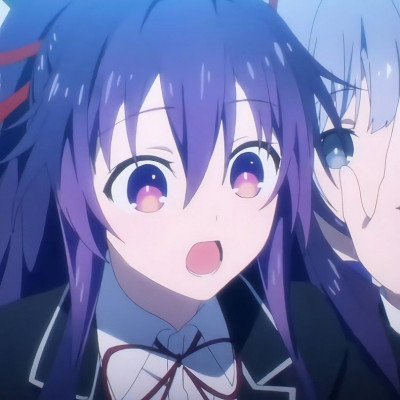 Tohka Yatogami is one of the main female characters of the Date A Live series and the first Spirit saved by Shido. There is also another personality named Tenka residing inside her, which only emerges when she assumes her Inverse Form. Tohka is a girl with very long, dark-purple hair in the same shade as the color of the night. She partially tied back into a ponytail with a ribbon while still letting much of her hair fall to her knees. Her dark purple eyes are described as crystal-like and have a golden tint. Shido remarks that her beauty is to to the extent of almost being violent. Tohka's height is stated to be 155cm, and her three sizes are B84/W58/H83. Upon her arrival on Earth, Tohka wore an Astral Dress with a black, cream, and pink color scheme and a set of purple-and-cream plated armor which adorned her shoulders and waist. The dress is open at the back and made up into a black corset (which exposes a part of her cleavage) and a two-layered, knee-length skirt which has a pink-to-white gradient. Her hair is tied back using a butterfly-shaped hair accessory. She also wears a pair of gauntlets which have petal-like cuffs, both sharing the same color scheme as her attire, as well as a pair of armored boots. While using Halvanhelev, her ribbon grows longer and sharper, and her underlying dress of light becomes more ragged. Upon her admission to Raizen High School, Tohka adopts the female uniform of said school. This apparel consists of a black, long-sleeved top (winter version), or a white, short-sleeved top (summer version), together with a blue skirt, and a pair of long, black stockings that reach up to half of her thigh. In her Inverse Form, Tohka's hair shifts into a dark purple-to-white gradient. Her eyes have also reversed its color scheme, turning magenta. She wears a dark violet dress attached with black laces and a set of grayish magenta-and-dark pink plated armor which adorned her shoulders and waist. The dress is open at the back and the front, which exposed most of her skin and a two-layered, knee-length skirt. She also wears a dark violet butterfly-shaped hair accessory with pointy edges while Inversed. While in casual attire, Tenka is adorned in a dark purple jacket and a violet skirt complimented with stockings. Unlike Tohka, Tenka lets her hair down without tying it with a ribbon. In Tohka and Tenka's fused form, their hair is completely tied into a ponytail. The right eye is Tohka's while the left eye is Tenka's. Only their right shoulder retains armor, which has a cape attached to it, while a smaller version covers their left elbow. The back of the Astral Dress has wings reminiscent of those attached to the halo behind Mio. Visually, the design looks like a combination of Tohka and Tenka's individual Astral Dresses. When Tohka first appeared on Earth, unsealed, she had a cold and emotionless demeanor. She was very wary of humans, as her only experience with them was being constantly attacked by the AST before Shido finally got the chance to talk to her. However, after Shido sealed her powers, she could finally develop and express feelings, as well as experience life on Earth. Because Tohka is new to everything (including to her own emotions), she has a very cheerful and child-like personality that can make her seem naïve, emotional, energetic, and gullible at times. She easily became excited at seeing all the things on Earth that she had never seen before. Origami has used her naïve nature against her on multiple occasions. She usually needs one of her friends (usually Shido) to point out to her when she is being tricked. She has a voracious appetite, with a particular fondness for kinako bread. Despite her lack of knowledge or experience, Tohka does have a reasonable sense of embarrassment, as shown by her overreacting when caught in humiliating situations. She did not, however, initially know what a kiss was, nor did she hesitate in performing one for the first time with Shido. However, later she found herself hating having to see him kiss other girls. At times, Tohka can be surprisingly insightful, as well as perceptive and understanding in regards to other people's feelings, especially when it concerns Shido and her fellow Spirits. She also initially had a difficulty of understanding the concept of love, not realizing what her feelings for Shido were until Volume 12. It has been shown several times that Tohka has a decent level of sensibility and instinct towards the battle, which arguably is the only thing of which she has any real memories. During her battle with Origami in her spirit form, she was able to analyze Origami's new powers quickly and came up with the best way for her to counter them. This expertise could also be the result of her constant battles with the AST until she met Shido. When in agreement to something, Tohka often has a verbal tic of saying "umu", an old-fashioned expression of affirmation. She also has an unusual intonation of long vowels, such as pronouncing date as “デェト” instead of “デート”.