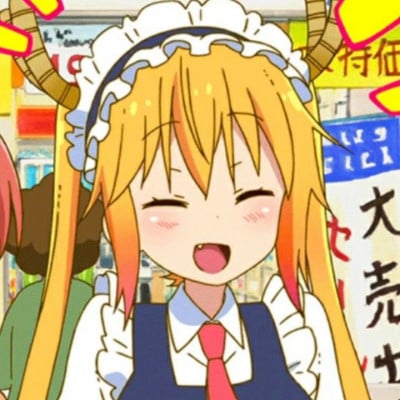 Tohru also known as Tohru Kobayashi is one of the main characters in the series Kobayashi-san Chi no Maid Dragon. Tohru is a female dragon with the ability to transform into a human girl. After Kobayashi rescues her, she falls in love with her and decides to work for her as a maid. She is the daughter of Damocles. In her human form, Tohru has long blonde hair with flaming orange tips and red-orange eyes with dilated pupils, and a buxom figure with large thighs and plump, bouncy breasts, claiming to be a D cup (for dragon size). She magically transforms her scales into a maid outfit, copying the uniform from a maid cosplay cafe (Maid Cafe Cozy) after flying to Kobayashi's apartment the first time. While in the private comfort of Kobayashi's apartment, Tohru wears her tail out, and on occasion, her wings. Outside, she hides both her tail and wings but retains her horns. Anyone who notices usually chalks it up to a form of cosplay. Tohru's dragon form appears as a big green European dragon with black wings and a light green underbelly. The height of her dragon form towers over Kobayashi's old apartment that's four stories high. In the anime, Tohru's hair is given an extra shade of pink and purple at the tips. As a Chaos Dragon, Tohru was raised to hate humans and was supposed to be a fierce and dangerous force of evil with nothing other than destruction in mind. However, this all changed when she met Kobayashi. She is now cheerful and kind to every human she meets, except for those who are a real, or as it is in most cases, imaginary, threat to her love interest in Kobayashi. She is also quickly influenced by what she sees on the television or the Internet, and shares a fiery relationship with her rival, Elma. As Kobayashi's maid, Tohru is a hard worker and cares deeply for the household, tending to all aspects of daily life, although this will often lead to trouble such as when Tohru tries to feed her tail to Kobayashi, or molests Kobayashi's dirty laundry. Even still, Kobayashi always shows her appreciation for Tohru's efforts, and does her best to guide Tohru in the ways of modern life and human culture on Earth. Tohru is very protective of Kanna, and is essentially her mother figure and big sister combined. Having been accepted by Kobayashi even in her dragon form, Tohru quickly fell deeply in love with her. Even faced with Kobayashi's stoic character and often unrequited advances, Tohru never fails to make her unending love for Kobayashi known. Tohru's equally strong sexual attraction to Kobayashi often drives her to trickery, such as making a chocolate heart with a love potion secretly added, or finding different ways to make Kobayashi eat her tail. Overall, Tohru is warm, loving and responsible. Although she retains much of her dragon-like powers and strength, she is more than happy with her life on Earth, and loves Kobayashi so much that she would rather stay and inevitably outlive her rather than return to her homeworld.