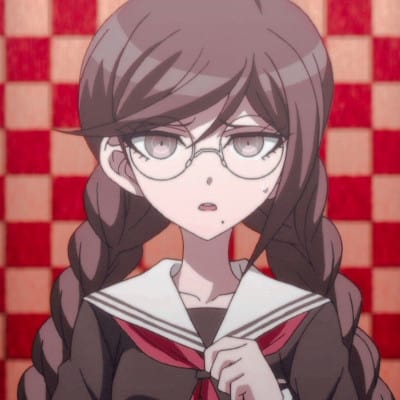 Toko Fukawa, is a student in Hope's Peak Academy's Class 78th, and a participant of the Killing School Life featured in Danganronpa: Trigger Happy Havoc. Her title is the Ultimate Writing Prodigy. She later returns as one of the main protagonists in Danganronpa Another Episode: Ultra Despair Girls alongside Komaru Naegi. At the beginning of the Killing School Life and in Danganronpa: Trigger Happy Havoc, Toko appears to be a young high school-aged teenager, but due to the memory loss she is two years older than she believed. She has long dark purple hair she keeps in two braids behind her, grey eyes and large wire-rimmed round glasses. Hidden by her long skirt are tally marks carved onto her upper thighs—a count of how many men Genocide Jack has killed. On the left side of her chin is a small mole. Toko's outfit is a typical purple Japanese school uniform with a noticeably lengthy skirt compared to those worn by other girls. On the upper sleeves of her shirt is her Former High School symbol. Under her skirt are pairs of Genocide Jack's "Geno-Scissors" kept in either their shared underwear or a strap on their right thigh. She also wears white socks and brown loafers. About six months later, in Danganronpa Another Episode: Ultra Despair Girls, Toko lets her hair flow freely instead of keeping it in braids. She wears several thin hair clips and now possesses an ahoge. Her uniform is noticeably more in tatters and tears than it was during her time at Hope's Peak Academy, and a large rip in her skirt leaves the tally marks Genocide Jack left on their shared body's thigh visible. She also has black thigh-highs and Mary Jane-style heels. Toko is intellectually gifted, yet she has problems in social behavior. It's been stated that she either never learned or never bothered to learn social skills. She even considers herself a 'gloomy outcast', often deciding to distance herself from others. Due to the constant bullying she faced as a child, Toko is highly suspicious of other people, frequently accusing them of thinking bad things about her. She expresses her opinions freely and extremely, which can come across as mean and often rubs people the wrong way, though she claims she is just being honest. She has an unusually quick tendency to self-victimize and she refuses to believe compliments from other people. She also is very self-conscious about her body and tends to think that other people consider her ugly. At times, in Another Episode, she tries to appear as young as possible and she is paranoid that others might consider her "an old hag." However, she is also offended if her body is not considered attractive and adult-like. In the first game, Toko can often be seen stalking Byakuya Togami, seeing him as the “ideal boyfriend," behaving submissively toward him and calling him "master." After revealing her alter, Genocide Jack, Toko's crush on Byakuya took on a more distinctively sexual undertone, and she was capable of neither proper judgment nor control over her perverse fantasies. In Danganronpa Another Episode, it's confirmed that she's a masochist, though she also seems to have sadistic fantasies about Byakuya. Ironically, she has a tendency to scold other people for being indecent, sometimes with no good reason. Due to her paranoia, she easily assumes that boys have bad intentions if they wish to spend time alone with her. Toko is also extremely afraid of blood and the dark due to very traumatic experiences. She also strongly dislikes bathing, to the point of fear, which might also be a result of an unknown trauma. Furthermore, she gains a fear of ghosts due to Komaru's ability to interact with them, even though she denied their existence previously. In Danganronpa Another Episode, Toko revealed a kinder and more caring side of herself as she traveled with Komaru throughout Towa City. Though she remained rather pessimistic and gloomy, she was more mature and stronger. She forced herself to be strong and believed that fighting against all odds is the only way out, often echoing Makoto's sentiments and begrudgingly crediting him with the courage she had gained. When Komaru approached the point of giving in to despair, Toko encouraged her to stand up and face her fears. While not used to touching other people, she is later fine with hugging Komaru, and willing to comfort her, though she says she isn't good at it. She finally finds a true friend in Komaru and is willing to stay by her side, and says that she's found her hope in her. As a result of her experiences in the killing game, Toko also became easily frustrated by people who give up and make excuses, calling them cowards. She accuses them of not being prepared to stand up for themselves, something that reminded her of her past self. She also took a stand in challenging her own fears; she no longer faints at the sight of blood, having taken Byakuya's advice about growing up. However, she still remained extremely disgusted at the sight of large amounts of blood.