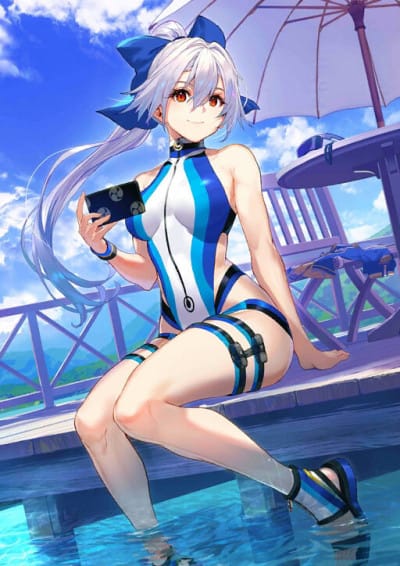 Tomoe Gozen, Class Name Archer, is an Archer-class Servant summoned by Ritsuka Fujimaru in the Grand Orders of Fate/Grand Order. In “Kiso’s Last Moments”, the 9th chapter of “The Tale of the Heike” written by Kakuichi, she was portrayed as “of lovely long hair, of truly outstanding features. Exceptionally strong with a bow, a soldier that matched a thousand, always ready to face even a demon or a god, be it mounted or on foot.” In other words, fair-skinned, of long hair, a great archer with outstanding features. A beautiful, mighty warrior - that is Tomoe Gozen. She will probably smile gently, so long as fury does not completely fill her heart. As a scion of ■■■■, she is conspicuously endowed with a savage disposition, but by containing that to the brink thanks to her feelings towards her beloved one, she has acquired individuality as a calm human woman—or so it seems. Despite continuing to love her lord Yoshinaka, she was not able to be with him in his last moments—A woman warrior that keeps concealing that single regret in her chest. That gentle sadness was transmuted into flames of resentment by Ashiya Douman during “The Tournament of the Seven Heroic Spirit Blade-Masters", turning into an aberration of wild flames that burned the Sagami Province to ashes. Originally, she is a willowy maiden, shunning the conflict between people, and preferring the beauty of nature. Tomoe Gozen’s view on life and death is clear-cut. She unquestionably believes that a transient guest called a Servant such as herself should silently disappear from the world eventually. In “The Absolute Frontline in the War Against the Demonic Beasts”, she had no hesitations in choosing a simultaneous kill with the enemy general Girtablulu. In her spare time, she is an avid fan of video games, especially those which feature combat or warfare. Her interest in them has led some Servants to refer to Chaldea's rec room as "Tomoe's den" due to the amount of time she spends there.