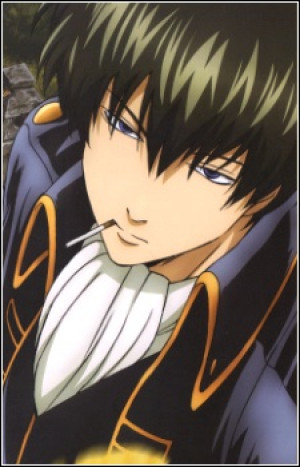 Hijikata Toushirou is the Vice-Commander of the Shinsengumi. Introduced as the brains of the Shinsengumi, he is commonly known as the Demonic Vice-Commander, striking fear into his enemies and subordinates (with the exceptions of Kondou Isao and Okita Sougo). He had a split personality named "Tosshi," an otaku identity that developed as a result of buying a cursed sword. This incarnation first appeared during the Shinsengumi Crisis Arc and again later in the Otsu Arc, where this personality dies by exhausting himself in a final match against fellow otaku, Shinpachi. Toushirou appears as a very handsome and attractive man. He has short, dark green hair (black in the manga) and gun-metal blue eyes (red in the manga). His usual attire is a Shinsengumi uniform, and on his days off he can be seen with a dark yukata & sandals. As his otaku alter-ego, Tosshi, he wears a light-blue, ragged vest, a red shirt underneath, a red headband, and black pants. During the events of the Dekoboko Arc, he switched genders due to a curse and was seen in his female form. As a woman, he had long black hair tied in twin braids and was overweight due to eating too much mayonnaise while in his normal form. Later he wore a purple kimono with a pig design on it. Due to having to endure being hated by his other family members for being an illegitimate son, being indebted to his older brother, and having no place to belong, Hijikata was an outsider. Despite this, he never stopped moving forward and aimed to become stronger because of the deep regret stemming from his being unable to save his brother and protect the ones he loves. Feared by both his enemies and his underlings, Hijikata, typically known as the Demonic Vice-Commander is very strict and dedicated to his work. He formulated the Kyokuchou Hatto, the 45 Regulations that form the disciplinary framework for all Shinsengumi members, and he implements them firmly. He is also fiercely loyal to the Commander of the Shinsengumi, Kondou Isao, as seen in the Shinsengumi Mutiny Arc when he (with help from the Yorozuya) went to save Kondou from Itou Kamotarou. Hijikata has a strong sense of pride, as seen in the Yagyuu Arc, when he claimed that his injuries (received from his fight with Kitaooji Itsuki) were actually from getting caught in an automatic door at the Marui Department Store. This is also evident in his going after Sakata Gintoki in order to avenge Kondou and the Shinsengumi's honor after Kondou lost a challenge to the silver-haired samurai for the right to date Shimura Tae.[1] He is very strict and efficient, managing to turn Yorozuya into an efficient organization with multiple branches and leaders in the Soul Switch Arc while he was in Gintoki's body. Similarly, his strict and imposing nature allows him to effectively command and lead the Shinsengumi. Hijikata puts on a tough attitude, but is willing to help those in need, as seen in the Yagyuu Arc and the Shinsengumi Crisis Arc. He has a stubborn streak and does not like to reveal his weaknesses. He also veils his good or kind actions with exaggerated annoyance and agitation, at times even appearing as a tsundere. Hijikata is a very short-tempered individual, always getting annoyed by other characters' antics and reprimanding them for it. He also threatens his subordinates with seppuku if they do not follow orders or fool around. Hijikata is a rabid lover of mayonnaise; in fact, he drowns almost all of his food in a ridiculous amount of the condiment before eating it, including desserts and coffee. He is also a chain-smoker, and once went to great lengths, in fact to other planets, to get his smoking fix when Matsudaira declared a city-wide smoking ban with immediate effect, though during the Silver Soul Arc he tried to quit smoking. However, as shown in the two-year time skip when he meets with Gintoki again, he was unable to quit and continues to smoke. In fact, he shows obsessive behavior and unhealthy addictions which seem to be hard for him to break and are his biggest weakness. He eats copious amounts of mayonnaise and believes the world loves mayonnaise. He similarly smokes so often that in episode 119, when smoking was banned at the Shinsengumi headquarters and all across Kabukicho, he left to space to obtain cigarettes and smoke (though later episodes show that smoking is still allowed in the Shinsengumi headquarters, implying the ban didn't last long). He does not lust for women and does not like cabaret clubs (when he was on leave, he went to the sauna and cinema). This is probably due to him being unable to forget Mitsuba, the one girl he truly loved. His personality is very similar to that of Gintoki's, as Mitsuba once remarked, resulting in the two frequently clashing as rivals. The two share similar fears, such as being terrified of ghosts and dentists, but they can also reach an unbelievable synchronization when fighting together. In the Baragaki arc, Hijikata claims that he and Gintoki are the same due to the fact that they don't seek or expect forgiveness to those they kill, but rather aim to stop those from making the same mistakes they once did. After he bought the cursed sword Muramasha, he developed a split personality named Tosshi. Tosshi's personality is similar to an otaku who was slain by Muramasha, the cursed soul from the sword: he watches anime in the Shinsengumi Headquarters, reads mangas that Hijikata used to hate and cares a lot about his anime figurines. He is also weak and afraid of fighting. This personality died by sacrificing his life in a final battle boxing match against Shinpachi in Terakado Tsuu's Fan Club Voting Competition Arc.