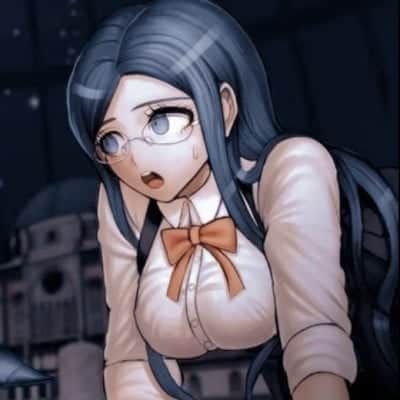 Tsumugi Shirogane is a student in the Ultimate Academy for Gifted Juveniles and a participant of the Killing School Semester featured in Danganronpa V3: Killing Harmony. Her title is the Ultimate Cosplayer. Tsumugi is a tall, young woman with long, knee-length, cerulean hair which starts out smooth and becomes wavy the lower it goes. Her eyes are soft teal and round. She wears rimless glasses with white temples. Her uniform consists of a white blouse, a knee-length pleated skirt, adorned with six white buttons on her waist; her skirt seems to be held by suspenders. She wears an orange bow, black socks ending under the knee, and grey shoes. Her blazer has two pockets on both sides and is adorned by the same white buttons as her skirt. She has been shown without her blazer in her promotional artwork, which shows the insignia of her former high school on her left breast. Tsumugi states as a rather normal and plain-looking otaku. Tsumugi is an honors type student who speaks in a docile and gentle way, but she becomes very passionate when she talks about her favorite series or cosplays, having a habit of slipping infamous quotes from various sources into the conversation. Being a self-proclaimed introvert, she also tends to ignore people while she's in her thoughts, no matter how many times they try talking to her, and appears rather distant at times. She tends to call herself and everything that she has done "plain," as she believes that among all of the students, she is the one who has the plainest appearance and personality. She uses the word repeatedly and sometimes appears even offended if someone else tries to argue that she isn't plain. She understands that some people might not recognize her as the Ultimate Cosplayer since her plain appearance conceals her talent. While Tsumugi is the Ultimate Cosplayer, she only enjoys making costumes, not wearing them, as she is not really fond of people looking at her. However, she hates using cosplayers who care more about standing out than the love of the characters, so she wears her own costumes as well but with love. She deeply loves cosplaying as she states that cosplaying is an expression of love. She has deep respect for fictional characters and gets very offended if they are disrespected. Despite her plain and docile attitude, certain hints suggest that she may actually be quite perverted, as she is a big stereotypical fan of anime and manga. After the time limit motive was made apparent in Chapter 1, she was saddened by not being able to hide her "special art commissions" and "that pillowcase" she bought before she dies. She also at one point, in an optional dialogue conversation, wonders if she could wipe her entire hard drive at home from within the Ultimate Academy, worrying about the pictures that were saved on it, perhaps hinting at an interest in pornography, hentai, or something similar to them. In her Love Suite fantasy scene, she appears to have an interest in incest, as she imagines her "ideal" as her older stepbrother, and sex is heavily implied (which seems to refer to the quite popular hentai trope of romance between step-siblings). She seems very intent on keeping this side of her hidden, as it is very rarely brought up or acknowledged by anyone in the killing game. Tsumugi is somewhat timid, and she is usually the first person who screams whenever something scary happens. Another notable trait of hers is that she is somewhat pessimistic, as shown in Chapter 5 when she refused to fight Monokuma, thinking that it was too reckless and dangerous. Furthermore, whenever someone else has a some sort of character establishing moment, she tends to act threatened and inferior, as she closes her eyes and puts her hands up in slight defense while she squeals something about how much more interesting, stronger, cooler or pure the other person is compared to her. Regardless, she generally appears to be a kind person, as seen in the way she grieves the deaths of others and treats Gonta in patient, gentle manner. However, she also seems to be very skilled with blending in her environment. She constantly changes her mind and follows any decisions made by the majority, even if she doesn't have any actual reasons for it, and she eventually followed everyone to beat the Death Road of Despair. In any occasion, she tends to react to even the most minor things said by the others. She is able to follow the conversation with Himiko about her "magic", asking Tenko why her technique is far too aggressive for a martial art like Aikido, and most notably she tries to tell Gonta not to be a too honest person. Notably, despite her somewhat timid and plain personality, it is indicated that she actually has the ability to take control in the few situations she wishes to. Right after meeting her, Kaede describes her as "exuding pheromones" and is distracted by her "sexy" face while having a conversation with her. When she later makes a cocktail for Shuichi in her personal bar, he notices that Tsumugi is discreetly seducing him through the clinking sound of the glass and the suddenly notable lack of her jacket covering her blouse. He ends up wondering just what kind of place she worked in. During her Love Suite Event with Shuichi, she quickly seduces him, as if "wrapping her voice around his brain" and he feels he cannot resist her.