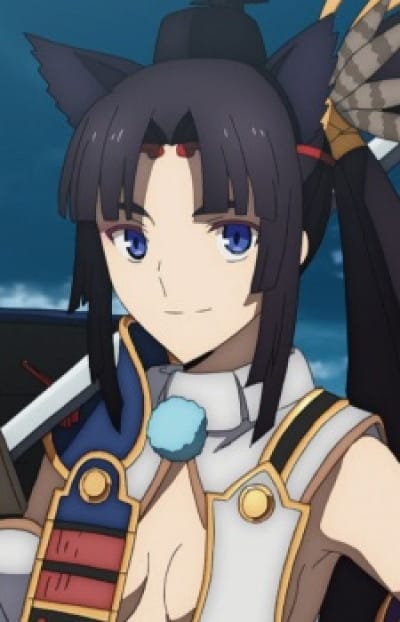 Ushiwakamaru, Class Name Rider, is a Rider-class Servant summoned by Ritsuka Fujimaru in the Grand Orders of Fate/Grand Order. She is also summoned by Rurihime "After" the Holy Grail War in Fate/Requiem. Ushiwakamaru is a young girl clad in samurai armor. Ushiwakamaru is a genius swordsman that wholeheartedly adores her older brother, Minamoto no Yoritomo.[4] She respected him as a samurai and loved him for being her brother. Although she tries not to be boastful, she says that he was the most exemplary older brother in the world. Ushiwakamaru likes to have fun. When she was a child, she was rather mischievous since she spent her days playing pranks on adults as a hobby and causing trouble for the monks, all while laughing out loud. Though she is not like that any more as she conducts herself properly to the best of her ability. For some reason, Ushiwakamaru has some level of acrophobia as she hates high places and never wants to be anywhere high. She was constantly persecuted by those around her in life due to her exceedingly great talent. While there is no doubt that she was an excellent tactician, Yoshitsune lacked something vital. That is fear towards the battlefield; she never thought battles were frightening. All throughout life, she was incompatible with the other military commanders. That Yorimoto even held killing intent towards Yoshitsune was probably something that she never came to understand in her entire life. For, since she was a genius, having concern towards abilities was something that did not exist in her. But no matter how many times she is betrayed, she still wants to fight for someone's sake. A beautiful swordsman who is disciplined, scolding even her Master for any sloppy habits. Despite her beautiful figure, showing an appearance like a flower blooming in the midnight, Ushiwakamaru is without self-assertion. She sometimes speaks as necessary, but she does not have a talkative disposition that can express a beautiful voice that would draw 10,000 people in to listen to it in ecstasy. Also, she does not boast her outstanding arts of war, instead proving it with nothing but results and at the scene of battle. It is possible to say that this person is a paragon of knighthood that discerns propriety and speaks with actions before words... and, someone simply seen as a genuine fighting machine. Because her character is straightforward and not a falsehood, all the established things Ushiwakamaru undertakes completely becomes the "shortest, fastest straight line" towards the goal. When ordinary people do this, they usually fail and reflect on their failure, and subsequently from that, they consider... and polish a variety of plans... The problem is, Ushiwakamaru is a super genius. Because she does not fail at these things, she has grown to as she is now with this unmanageable nature. In battle, Ushiwakamaru is cold-hearted, cool-headed and the personification of the most suitable hand, but ordinarily, she is a young girl who earnestly wishes "to become her older brother's power, to become the head's strength, and to want to help this splendid figure." To address this in a few words, "a faithful dog with a broken brake." She is faithful, bright and friendly, but somewhere, she is missing a screw... no, it becomes unclear of its whereabouts. Her talents sublimated up to its utmost limits and her extraordinary loyalty becomes intertwined, and a person (Master) that notices "this unthinkable genius who, without thinking, is just unreasonably becoming emotionally attached to me for no real reason" won't understand why and might harbor fear at that characteristic. On the other hand, how Ushiwakamaru treats her subordinates is surely demonic. "Die so you can make an easy place for me to fight. That is your role." Ushiwakamaru is a girl who really loves her brother and is making great efforts as a girl who really loves her Master. That cool behavior that does not get agitated by anything... from there is a ferocity one step short of an unleashed Berserker's, and anyone would be bewildered at that. If the Master is vexed about "If that enemy's ship is usable...", Ushiwakamaru will head towards the ship visibly like a gale while saying "Master, please leave the decisions to me!" A few minutes later, she would inform the Master about the ship and say "Master, this way to the ship!" However, except for the sailors operating the ship, everybody will be completely dealing with the scene of carnage called "being bound for the netherworld." Ushiwakamaru is a cool-headed subordinate, but she too is a person that draws from the blood of the Minamoto clan, a clan of which has the origin of the word "ruler" in the past. She is only a faithful dog towards the Master, and will display a sadistic and cold-hearted side to anyone except the Master. Naturally, much like with her brother, Ushiwakamaru will serve her Master with all her heart, fighting until her's or her Master's final moments. Ushiwakamaru's wish for the Holy Grail is to be with her older brother. It would truly make her happy.