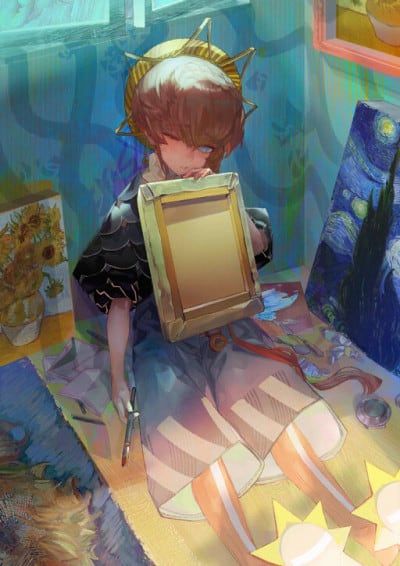 Van Gogh, Class Name Foreigner, is a Foreigner-class Servant summoned by Ritsuka Fujimaru in Fate/Grand Order. Van Gogh, despite the fusion of two Heroic Spirits, is exactly like Vincent Van Gogh, eating large meals, making jokes, and laughing with a gloomy expression. She tends to alternate between gentle solemnity, painful depression, and deranged laughter, to both a terrifying and heartbreaking degree. It can be said that Van Gogh's personality and body are mostly those of Clytie. That is why the motifs of flowers and jellyfish are mixed with each ascension, and it is her deep regret and sadness that makes her look like a mourning dress at the second ascension. Is the low self-esteem and flirting smile due to self-loathing for losing everything from folly? In order to turn away from such "I am not Van Gogh", she will unknowingly insist that "I am Van Gogh". As a "patchwork", she is always worried about her identity. The anxiety eventually arouses madness, transforming her own spiritual base into a "flower evil god," causing a crisis that leads humanity to eternal sleep alone. Can you give her a stable identity before that happens? The responsibility placed on her master is too heavy. However, it is a servant named Clytie Van Gogh who is also good at wisdom because he was surprised. As something cobbled together, she is always worried about her own identity. That anxiety would eventually drive her mad, transforming her Saint Graph to the "Evil God of Flowers", bringing about a crisis that would lead the Human Order to eternal sleep all by herself. Can you give her a stable identity before that comes to pass? The responsibility placed on her Master is way too heavy. ...However, contrary to expectations, Clytie-Van Gogh is a Servant who is very cunning. If it is a Master who, after many adventures, comes to know of her bothersome aspects, her slyness, her strong will, her firm sense of duty and her faithful camaraderie, and nurtures their bonds with her, they will be able to guide her as a loyal and dependable adviser who won't let her degenerate into a god of madness. After many adventures, a master who knows her hassle, slyness, core strength, in-law and friendship, and develops bonds, will not fall into a crazy god and will be faithful to her. You can lead it as a reliable staff member. She refers to herself as simply "Gogh".