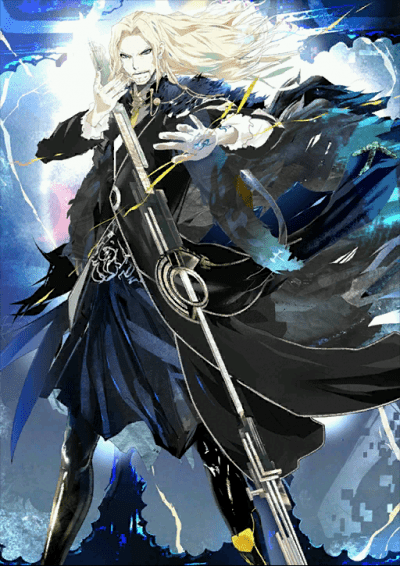 Vlad III, Class Name Lancer of "Black", is the Lancer-class Servant of Darnic Prestone Yggdmillennia of the Black Faction in the Great Holy Grail War of Fate/Apocrypha. Lancer is dressed in a royal fashion, appearing as black as a shadow in the night, contrasted with his pale face and long, silk-like white hair. He gives off an overwhelming presence, causing ceaseless trembling wherever he happens to look. This does not stem from fear due to a violent nature, but rather that those exposed to his icy gaze recognize themselves as hopelessly weak and powerless existences before him. It is said that the difference between him and his counterpart is their aspects being different, this version being Vlad III's aspect as a King, while his counterpart is his aspect of a Warrior. Though there is an aura of danger about him, he in fact possesses a modest and considerate personality. His opinions and unrestrained manner of expression lend easily to the impression that he is a sociopath who has disengaged himself from the standard mores of society. His somewhat obstinate nature worries Darnic, but he believes they will work fine together due to having the same goal. He is the only one of the Servants who truly possesses a fervent desire to obtain his wish. He is angered by the legend of "Count Dracula" that has stained his name, so he wishes to restore his name's honor.[3] Although he will not deny the path he walked in life, even those to which he has resigned himself like the war against the Turks and his imprisonment, he cannot forgive his name being smeared with blood, telling of a humiliating legend of a blood-starved fiend, in matters that did not involve him in any way. He tries to ignore the reputation of the vampire modeled after him in a mature manner, but somehow, representations of him that he comes across will end up being destroyed. Despite being a Servant, he is the effective leader of the Black Faction. He sits atop a throne as Lord of the castle, with Darnic serving at his side. He does note that although Darnic refers to him as Lord, that he will call him Master in turn and state that he is only a Servant. He chides Darnic for excessive flattery, stating that he lacked much as a leader. He did not have the people behind him, great captains to properly lead his soldiers, meaning he could accomplish little else on the battlefield besides what he gave his all to accomplish. He does not state it as an admission of incompetence, but that he did not have enough people and time. He is greatly pleased at having finally obtained his captains, the six irreplaceable Heroic Spirits following under him, especially noting Siegfried as the most magnificent warrior and Caster of Black's golems as an incomparable force of war. He wishes they had been by his side during life, allowing for the circumstance of his imprisonment to be avoided.