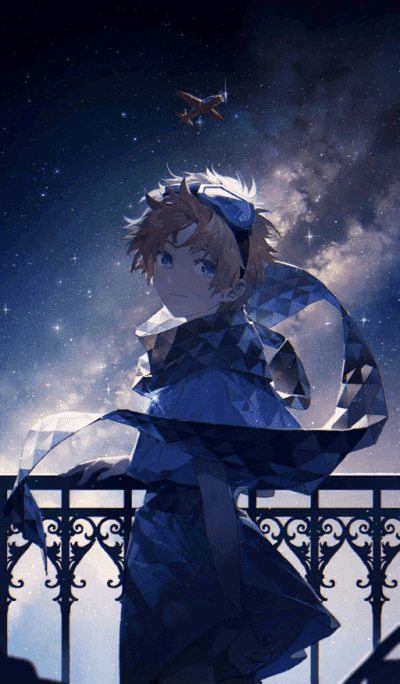 Voyager is a Voyager-class Servant contracted to Erice Utsumi "After" the Holy Grail War‎‎ in Fate/Requiem. He is also summoned as Foreigner in the Foreigner-class by Ritsuka Fujimaru in the Grand Orders of Fate/Grand Order. A mythical boy who appears before Erice. He appears to be around age 8 or so, and possesses angelic features, such as pale blonde hair that is almost white, blue eyes, and a pale caucasian complexion. He is dressed in a white cotton tunic and shorts, with a circular image of space beneath an eight-pointed star, as well as golden boots which are tapered at the back much like spurs for horse riding, a belt, and a scarf/muffler which flutters of its own accord without wind, all made of the same material. He is occasionally seen wearing aviator goggles on his head. The goggles originally belonged to his Master, Erice. His golden scarf is always swinging away. His outer appearance was significantly influenced by the thoughts of his Master “Erice Utsumi”, whom he shares a deep relationship with. Voyager goes along very well with Kijyo Koyo like a kid with a huge dog, and is strangely attracted to music. He is emotionless, clueless, quiet, and almost fearless, but displays high curiosity on something that catches his attention. He has also mentioned he has a fear of snakes, and is willing to fight any opponent, no matter how powerful, so long as the opponent isn't a snake. He has also shown displeasure about being hot in a bath. He lacks a large amount of knowledge that one would naturally assume the Holy Grail would provide, such as what a bath is, or even the concept of War, to the shock of Erice, Koharu, Galahad Alter, and Hannibal. He's as curious as any space probe should be. He's proactive and wants all kinds of new experiences. Smell and taste are entirely new senses to him, so he's a sucker for good meals and rare desserts. Even in unknown places, he displays an absolute sense of direction and space comprehension. He has excellent hearing and memorizes everything he sees or hears. Although his vocabulary leaves much to be desired, he understands various languages. He loves listening to all kinds of music and can immediately be captivated by live performances. He seems a bit afraid of baths.