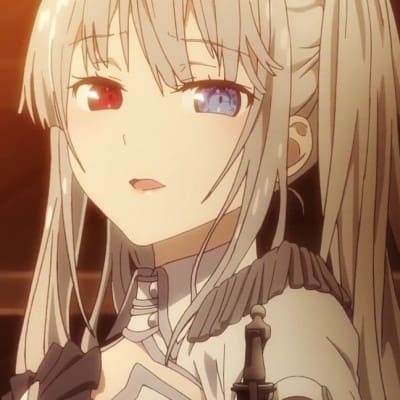 White Queen is the Dominion of the Third Region: Binah. She is also known as White Kurumi. It is revealed that her dominant personality is Kurumi's childhood friend, Sawa Yamauchi. White Queen wears a white military dress decorated with epaulettes, and a white admiral's cap with an emblem similar to that of a rising sun on the front of it. In the middle of the emblem is a clock face. She also wears white gloves and white, heeled boots. She has long white hair usually tied in symmetrical twin tails. Her right eye is red-tinted while her left eye appears as a blue clock face. She is stated to look identical to Kurumi, aside from the obvious color scheme differences. The White Queen has a composed and regal disposition. However, that is merely a façade- she sees her followers as pawns for her to use and sacrifice. According to the Empty serving in her palace, the Queen can tell them to die, but she will never show any gratitude. This façade is strangely sweet, cheery and calm- similar to that of a regal, composed queen, but also is easy to see through. Rather than a battle maniac, the White Queen is a strategist. She performed infiltration, acts of terrorism, and experiments to change Empty into monsters to strengthen her army. She also captured and tortured Cistus to study and exploit Zaphkiel's power. The White Queen is also callous, aggressive and intelligent. These traits combined together make for a formidable opponent, and this was acknowledged by the other Dominions. She has immense power, and all the tools at her disposal to back it up. She is considered and careful when planning attacks and engaging in battle, and will sacrifice her own soldiers when needed to ensure a victory. She also has the capacity to forward plan, and is uninhibited by taboos in the Neighboring World, one of these including encroaching on other Regions. The White Queen is goal-oriented and believes that her goal is far more important than the lives of her enemies and allies, as shown by how readily she sacrifices her own troops. The White Queen has multiple personalities due to using the Scorpion Bullet <Akrab> on herself. As a result, her speech can be unstable, changing styles throughout sentences. Including the original Overlord personality, there are 6 personalities in total. Each personality is in charge of a specific role for the Queen. General excels in fighting, Lady seduces and corrupts Quasi-Spirits, Executioner specializes in executions, Agent carries out infiltration work, and Politician takes command of the Empties. The personalities can also mentally communicate with each other, often dictating a specific personality in charge for a given task.