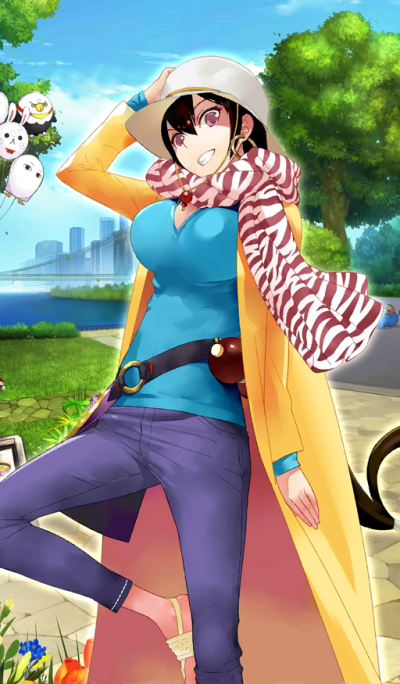 Xuanzang Sanzang, Class Name Caster, is a Caster-class Servant summoned by Ritsuka Fujimaru in the Grand Orders of Fate/Grand Order. A bundle of curiosity. Xuanzang loves adventure! A figure brimming with the spirit of inquiry towards the unknown with an unwavering self-confidence. Although gracefully silent as a beautiful and faithful monk, her spirit overflowing for a desire to challenge herself decorates her facial expressions, and it truly does not conceal her nature of having an unyielding spirit. “As long as there are the chirpings of adorable songbirds that signals the morning’s rise, and the guidance, compassion and divine protection of the honorable Buddha, my journey will not be hindered by anybody and everybody!” Xuanzang is confident in herself————or so it looks like with an open glance of her. As a matter of fact, the reason she is confident is in regard to the sacred Buddhism religion, so she does not believe even a little about herself as a great person and the likes. She is also not self-aware of herself as a talented student. Although she remembers only a faint bit concerning her experience of being kicked out of the heavens for having deceived Master Tathagata in the spur of the moment in the heavens, the root of her is humble given that it is permeated with the depths of her memories. Xuanzang appears strict, but her nature is gentle. Especially to the weak, she is earnestly kind, and if a person is troubled, she will not forsake them. Because she is not thoughtless, she is extremely positive thinking oriented since she has a belief that is unshakeable, called “being rewarded for persevering three times the hardship.” Taking into consideration that she is never mistaken regarding the “Way of Man”, she often becomes lost during her travels. And because she gets lonely when she becomes lost, she cries before long. Xuanzang recognizes the Master as a “disciple”. Frankly, she is strict to her companion that she deemed as a “disciple”. Although, given that she expects a growth from them that progresses down the tough path of a “Buddhist disciple” sufficient to the point that they will receive the same reward like other disciples, when it sometimes come to it, Miss Tsundere Teacher here will be gentle either way. Xuanzang is a rather upbeat person, often times looking on the bright side, cracking jokes, and she speaks in a way full of energy. She wears her faith like a badge, mentioning the Buddha countless times, thanking and praising him. She even gives offers to have others become a Buddhist. As soon as she becomes close to her Master, she immediately takes them on as a disciple, trying to teach them in the ways of Buddhism. Despite being so cheerful, she sees herself as an idiot who is prone to mistakes, but because of her faith, she believes that despite that, all are given guidance equally. It is stated that she and Sun Wukong are very close, to the point Xuanzang often mentions him. This close relationship almost borders on reliance as she often wonders how affairs may go without him by her side. She's stated to miss him, but clearly gets flustered over the topic. This reliance doesn't just extend to Sun Wukong as she has stated the only thing she dislikes is being alone, though she quickly tries to change the topic. Xuanzang has no wish for the Holy Grail because she believes a disciple of Buddha has no need of such a thing.