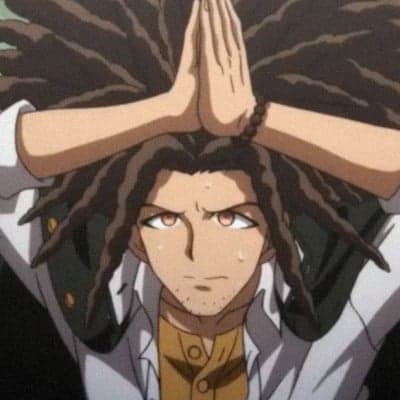 Yasuhiro Hagakure, also known as Hiro, is a student in Hope's Peak Academy's Class 78th, and a participant of the Killing School Life featured in Danganronpa: Trigger Happy Havoc. His title is the Ultimate Clairvoyant. Yasuhiro is one of the more cheery, laid-back students, though a bit odd as well. However, he is generally not well-liked and he himself has openly admitted that he has no friends, being quite cowardly, lazy, slow-witted, and having a habit to act selfishly. Notably, he is mentioned to be very clumsy with money and he has constant problems with massive debts. This trait is especially apparent when he stated that he bought his crystal ball (which is made of glass instead of crystal) at the price of 100 million yen due to it being used by Napoleon, Genghis Khan, and George Washington in the past. He has also bought multiple items related to fortune-telling, despite not actually having any use for them. He tends to talk absurdly about subjects such as conspiracy theories and the one time aliens stole his hamburger. However, he really hates it if someone compares his fortune-telling to the occult, frequently insisting that they are not the same. He is also afraid of ghosts and would freak out if such a subject comes up in a conversation. Whenever he "senses" one, he swiftly recites a chant, casts a spell, or begs for help from a hero, a god, or a famous person (often random, even multiple ones). Furthermore, he is stated to be absolutely horrible with women and has bad hygiene, claiming that he washes his hair once a season. Yasuhiro is quite gullible, and at first acts laid-back about the killing game, thinking it's some sort of a prank. However, after realizing it is real, he turns much more panicky and he is generally considered useless by the other students. However, he does treat his fellow classmates with general friendliness, going so far as to add the suffix "-chi", an affectionate term for dear friends in Japanese, to the end of everyone's last name (except for Sakura Ogami, whom he is afraid of and just calls with the insulting nickname "Ogre"). This habit of his is also shared with his mother. In English translations, he tends to call other people "dude".