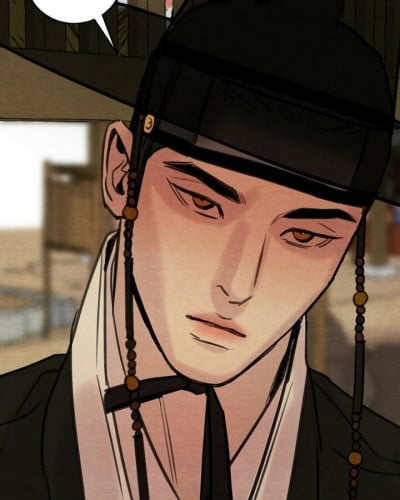 Yoon Seungho (윤승호 Yun Seung-ho) is one of the main protagonists of Painter of the Night. Seungho is a young man of a tall and muscular build, with toned muscles and a sharp jawline. He has fair skin, thick eyebrows, and long, black hair regularly tied up into a topknot, referred to as "sangtu" (상투)in Korean. Seungho's eyes are an intense shade of warm amber. He is regularly seen wearing the typical attire of that period. Yoon Seungho is educated, experienced and endowed. He has read all books in his private library that resembles bookstore. He memorized poem written by Wang Bang Yeon, a famous poet. He has a spacious residence, more servants than one can count, an abundance of riches and a name of influence and power. Even so, Yoon Seungho doesn’t have interest in taking government post. He refuses to take civil service examination. The reason is still unknown. He only says that sight of old, bearded men makes him shudder. Yoon Seungho has unbridled lust and commits sodomy with a different man every day. He is known as a notorious hell-raiser, a fiend for sodomy with no regard for time or place. He rumored to have had his top-knot cut off by his father. Yoon Seungho is impatient and will get what he wants. Seungho has shown interest in paintings since young. When he was young, he would paint on his servants’ body when they irritated or displeased him as a game. The servants themselves would shiver and shake. When he is a full grown man, Yoon Seungho falls into a famous series of erotica paintings. His loins heated whenever he sees the paintings and he cannot engange in his nightly activities without them. He searches the painter behind them through his pseudonym. He kidnaps him and forces him to become his private painter when the painter, Baek Nakyum is no longer paints. In order to make Nakyum paint again, Yoon Seungho promises to Nakyum that Jung Inhun will achieve greatness with his support. According to Servant Kim, Yoon Seungho has been hurt in the past so he is very unstable, with violent mood swings. Seungho often has nightmares in his sleep. He rarely fast asleep, when he does, it is in a night he spends with Baek Nakyum. Yoon Seungho is a cold blooded man who doesn’t hesitant to kill and punish a servant, however he shows some mercy at Nakyum. Lee Jihwa who notices that finds it odd since Yoon Seungho is not one to go back to his word. Yoon Seungho goes back to his word when he says he wouldn’t embrace a peasant. Yoon Seungho has no regard at others’ opinion including his own family. He doesn’t care that his action would make rumors circulate. Yoon Seungho lends his robe to Nakyum and outfitting him tailored clothes which are considered as odd because no noblemen did that to a lowborn. Though Yoon Seungho’s unbothered attitude, he would see over Nakyum in his room several times. When it comes to Nakyum, Yoon Seungho doesn’t act like usually. He would show possessiveness over Nakyum that he doesn’t over others, as stated by Master Min. Yoon Seungho also shows jealousy when it is related to Nakyum and Inhun. Jung Inhun realizes that whatever the topic of discussion with Yoon Seungho will involve Nakyum in some way.