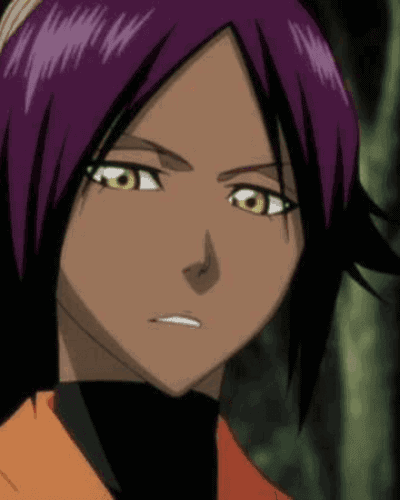 Yoruichi Shihōin is the former captain of the 2nd Division of the Gotei 13, as well as the former commander of the Onmitsukidō. Her Lieutenant was Marenoshin Ōmaeda. Having abandoned her command of both positions, she works with Kisuke Urahara and Tessai Tsukabishi, based in the Urahara Shop out in the Human World. Yoruichi Shihōin is a slender and well-endowed woman of average height. She has dark skin, golden irises, and black hair. Her hair is waist-length and kept in a ponytail with chin-length bangs framing the sides of her face. Her standard attire consists of a black, backless, sleeveless undershirt, an orange over-shirt with two white straps on each shoulder, a large beige sash around her waist and black stretch pants with a pair of lightweight brown shoes, which allow for stealth and easy use of Shunpo. She previously wore a beige neck warmer, which she pulled up to cover her face in order to hide her identity, but seems to have forgone its use. She occasionally wears long beige wrist and leg warmers, each secured by bands. During the Quincy Blood War, Yoruichi wears a short dress, arm warmers and thigh length boots. Unlike any other known Shinigami, she can transform into a small black cat for long periods of time. In this form, she has a distinctive male voice and golden eyes. 110 years ago, during her time as a captain, she wore the same sleeveless and backless Onmitsukidō uniform, with long black wrist guards which Suì-Fēng wears now, but had a black ribbon tied around her neck. She wore a long-sleeved captain's haori. Her hair was much shorter, cut in a style similar to Suì-Fēng's current hairstyle, but without the braids. At some point prior to this, she wore the white Onmitsukidō uniform of the correction corps. Yoruichi is intelligent and witty, holding an intimate knowledge of Soul Society and its workings, as she was the former leader of the Onmitsukidō and the Second Division's captain. Although of noble birth, she acts differently from most other nobles, very much like Kaien Shiba. For instance, she instructed Suì-Fēng to refer to her without using honorific suffixes, but reluctantly settled for being called "Yoruichi-sama". On several occasions, she transforms into her Human form directly in front of Ichigo just to see his reaction to seeing her naked, which she teases him about. In addition, she speaks in a dialect used by elders, such as identifying herself as "washi" (a term usually used by old men to define themselves with), instead of more feminine terms like "watashi", in both her Human and animal forms. While it is unknown how she obtained her cat transformation, she appears to prefer spending most of her time in it. Upon showing her Shinigami form to Ichigo, she forgot to put on clothes, as she had grown used to not needing them; due to being in cat form for so long. She especially takes delight in transforming in front of people to see their shocked reaction, due to her cat form making her sound male. Her love for her cat form extends to great anger should someone harm it or insult its appearance, as seen from how upset she got after her tail was damaged. Although relatively calm and mature when a situation calls for it, Yoruichi is quite laid-back and playful, often teasing or flirting with those younger than her, such as Ichigo Kurosaki at the underground hot spring, a younger and hot-headed Byakuya Kuchiki, Suì-Fēng before her time as a captain, and Kisuke Urahara, childhood friend, former underling, and fellow ex-captain. Yoruichi prefers to drink milk, which fits with her practice of transforming into a cat.