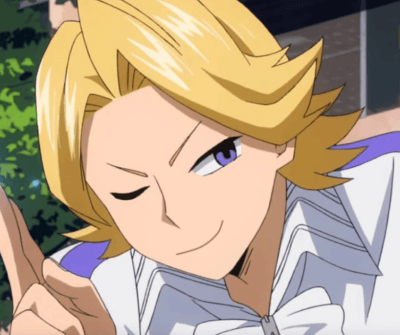 Yuga Aoyama, also known as the Shining Hero: Can't Stop Twinkling, is a student in Class 1-A at U.A. High School, training to become a Pro Hero. Yuga is a young man with a slim build and a rather feminine face. He has long blond hair, worn flattened down around the majority of his head, spiked and sticking out to the sides at the bottom of it, with a side fringe that curves upwards a little before it does down. He has notably long eyelashes and bright indigo eyes, giving him the appearance of a young prince. His hero costume consists of bluish-black body suit, over which he wears a suit of metallic lavender and golden armor; a chestplate, two spherical shoulder pads, elbow length vambraces and knee length boots. His chestplate has a high V-neck collar with a golden greek fret-like trim, as with the lower diaphanous piece under the belt and the edges of the vambraces. It also comes with a long, glittery indigo cape as well as a belt with a golden ring-shaped buckle with a blue crystal, from which he emits his Quirk, matching the smaller ones over his shoulder pads and knees. He has straight angled golden lines running down his baggy pants, a matching set around the shafts of his boots, and he wears a red-tinted wing-shaped visor over his eyes. Yuga appears to be a vain and prideful person, thinking of himself as superior to the rest of his classmates, especially in regards to his Quirk. He exhibits extremely flamboyant mannerisms, is fond of posing and likes to grab the attention of those around him despite frequently getting ignored by his peers. His expression rarely changes from a closed smile, even while he speaks or gets hurt, and he's also prone to getting upset if interrupted or questioned. Yuga's sentences often end with a star (☆) symbol, indicating a fancy tone. He also tends to play up his French heritage, occasionally implementing French words into his sentences.