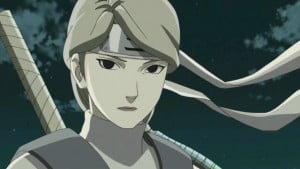 Yugito Nii (二位ユギト, Nii Yugito) was a jōnin from Kumogakure and the jinchūriki of the Two-Tails. Yugito was made the Two-Tails' jinchūriki at the age of two and, at the end of a detestable training that was imposed on her, she was able to control her transformation into her tailed beast at will.[1] At some point in the anime, Yugito agreed to give Nekobaa a paw print of the Two-Tails for the Paw Encyclopaedia. Yugito gained confidence in herself through hard work, making her a courageous, proud and wise kunoichi. This was seen when she was able to trap two members of Akatsuki, along with herself, in a building, vowing that they'd never leave alive, going as far as setting off explosions.[4] Also, it was said that she was firm, decisive, and thoughtful of her team-mates. Yugito had long, straight, blonde, hair bound with taut bandages, dark eyes and she wore red lipstick. She wore a short-sleeved black and purple blouse and black pants, both of which had a design similar to clouds on them, purple fingerless gloves and a chain of blue beads wound around her left hand. She also wore the standard Kumogakure forehead protector, sandals and a kunai holster, which was strapped to her right thigh. Yugito also wore bandages around her arms and legs as well as a red belt around her waist. Birthdate : July 24 Age : 29 Ninja Registration : CL5322