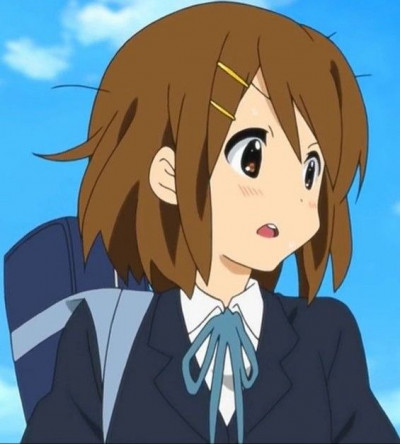 Yui Hirasawa is one of the 5 main characters in K-ON!. She's also the main protagonist. She is the air-headed lead guitarist and vocalist of the band Ho-kago Tea Time. Her voice providers are Aki Toyosaki (Japanese), Ryu Jeom-hui (Korean), Julia Meynena (German), Lin Meixiu (Chinese), and Stephanie Sheh (English). Yui is a teenager with a slightly below average height of 5'1", with brown eyes and thick medium brown hair at shoulder length, often accessorized with two yellow pins. Always looking for fun, Yui is fearless; anxiety and stage fright are unknown to her. She likes everything cute and makes a lot of physical contact with others like holding hands or hugging. She also loves everything sweet, so she's energized by the sweets that Tsumugi brings and her physical constitution is such that she does not gain weight no matter how much she eats. She can't stand being hot or cold, so she spends the winter under the kotatsu and rolls around on the floor in the summer in front of the fan to keep cool. Yui is rather lazy, so her grades with the exception of fine arts are always on the verge of failing; sometimes she is the only person in her class who needs to retake a test, while other times she manages to avoid failing all of her subjects by a one point margin. She has an average figure. Yui lives in a family of four with her younger sister Ui and both parents. Her parents are a "lovey-dovey" couple and often go on trips together, leaving both daughters behind. Having misunderstood that "light music" means "easy music" (like whistling), Yui joined the Light Music Club and picked up the guitar with absolutely no prior experience. She cannot do more than one thing at a time, but to make up for that she can be highly focused on a particular subject and once started, can advance quite rapidly. However, whenever she learns something, she tends to forget everything else. Yui is the type of person who doesn't read manuals and relies on her own intuition and self-taught approaches. She also does not remember any musical terminology. She possesses perfect pitch and is musically gifted, being able to tune her guitar without a tuner, but she does not appear to make the best of her ability. Yui is relatively determined and competitive, but at the same time she feels comfortable depending on the help of a few good friends like Ui, Nodoka, Mio and Azusa.