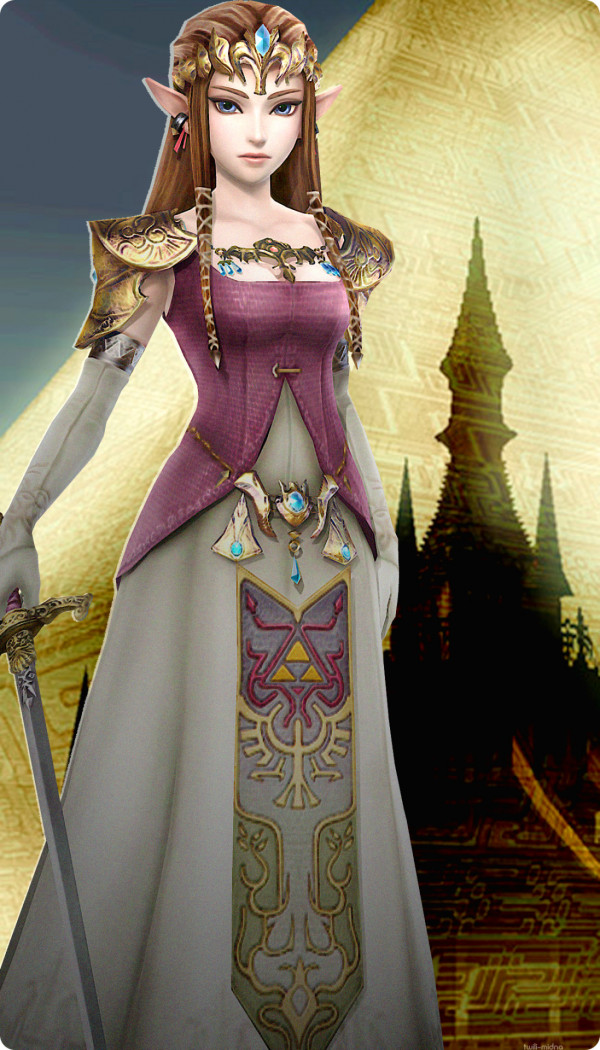 Zelda, is the eponymous character of The Legend of Zelda series. With the exception of Link's Awakening, Majora's Mask, and Tri Force Heroes, an incarnation of Zelda or one of her alter egos has always been one of the central characters in the series. __Appearance__ Princess Zelda is often shown as a beautiful and elegant princess, with the exception of Skyward Sword, where she is portrayed as an ordinary girl before the kingdom of Hyrule had been established. She is always either a child, teen, or young adult. Her hair color is depicted as blonde in most games of the series, as well as brunette in Twilight Princess and red in The Legend of Zelda and The Adventure of Link. Her eyes are portrayed in different shades of blue throughout all the games, with the exception of her green eyes in Breath of the Wild. Her ears are pointy, as is characteristic of all Hylians, although in some games her ears tend to be shorter than in others. The dresses that she wears are long with determinate colors, such as different tones of pink, white, and blue. Most of her dresses are shown with the Hylian Crest, and in almost every game, she is seen wearing a tiara with either a red, pink, or blue jewel in it. In some games, she also wears long gloves. Princess Zelda is seen wearing makeup in most games, such as in The Wind Waker and Spirit Tracks, and her hairstyle is characterized either with her hair down or with braids. She wears high heels, although in Twilight Princess, Skyward Sword, and Breath of the Wild she wears boots. She also occasionally wears sandals, such as in Skyward Sword and Breath of the Wild. Each incarnation of Zelda has been shown at various ages depending on which title they appear in. They have appeared as a child, a teenager and as a young adult; for example, the Princess Zelda in Twilight Princess is around 20 years of age. __Personality__ Zelda is depicted as a kind and benevolent ruler with a wisdom beyond her years and a deep love towards the people she watches over. She is a caring, gracious, and self-sacrificing person. Zelda's most prominent display of compassion and selflessness was when she saved the life of Midna, the Princess of the Twilight Realm, who had been nearly killed by the false King of the Twilight, Zant. Zelda's wisdom is her most valuable attribute. As a matriarch, it is imperative that she makes the wisest decision concerning the fate of Hyrule; in Twilight Princess when Zant threatened her life and the lives of all of her subjects, she wisely surrendered to him. She upholds her responsibilities no matter the cost and is always willing to help her friends, such as in Skyward Sword, where Zelda faces her duties as the goddess reborn and willingly remains in a deep sleep to keep Demise imprisoned within his seal. Above all, Zelda is known to be a forgiving person even towards those who have harmed her before, as seen in Spirit Tracks, where she asks Anjean to take care of Byrne even though he was the one who stole her body. Princess Zelda is one of the three most important characters of The Legend of Zelda series, which is also why her name appears in the title of every game. Princess Zelda first appeared in the original The Legend of Zelda, and has since been featured in every subsequent game, with the exception of Link's Awakening. Each incarnation of the Princess is chosen by destiny to be the keeper of the Triforce of Wisdom in their respective eras, which is the main reason why they play such an integral role in the legends of Hyrule.