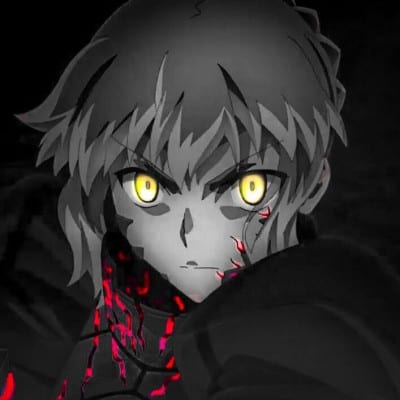 Artoria Pendragon (Alter), Class Name Saber Alter, is the Saber-class Servant of Sakura Matou in the Fifth Holy Grail War of Fate/stay night's Heaven's Feel route. She is a changed version of Artoria Pendragon after being consumed and blackened by the mud from the Shadow. She is one of the Servants summoned by Ritsuka Fujimaru in the Grand Orders of Fate/Grand Order. Corrupted by Angra Mainyu, Artoria Alter is vastly different from her normal self. She is also called Black Saber. The results of her alteration is not only within Artoria Alter's interior but also extends to her outward appearance. The color of her skin becomes pale, and the pupil of her eyes that were at first concealed behind a black visor during the moment of her summoning becomes golden from her original green eye color as well. Because the armor she wears was dyed jet black and grew in weight due to changing into a heavier armor, its power has increased more than normally. In Fate/hollow ataraxia, she wears her casual clothes; a gothic dress called Alter Gothic Dress. A different aspect of the King of Knights devoted to cruelty, greatly unlike the case of the normal Artoria. She is referred to as Saber Alter. A behavior without futility, a cold-hearted personality that makes Artoria seem like a different person, but if one is to carefully come into contact with her, they might notice that what lies at the basis is still the same. Artoria Alter's personality changes vastly from her normal self upon being corrupted by Angra Mainyu, but she cannot be called a villain. She is more of a dark hero who is still an idealist clinging to her own values even after being blackened. After taking in by the hatred of the curse, Artoria Alter comes to the realization that the duty of a hero is to be hated and ostracized, that a hero's only duty is to cut down foes using all their strength. She believes that she was prepared for such an outcome upon drawing Caliburn, and decides to entrust her blade to All the World's Evils. While she still takes her duty as king seriously, believing it is her obligation to those whose lives were lost because of her, she no longer believes in the ideals set for herself and her people. The end was concluded long ago, after all her prayers and glory vanished on the hill in Camlann. While alive, Artoria did not fall into the path of evil even once, but she too had doubts, inner conflicts, hatred towards herself and grief towards the surroundings. This figure, influenced by the curse of the Holy Grail, is someone that had such issues hidden within her raised to the surface and caused her "policy" to go inverse. Because a section of her character's attributes has been inverted, the basis of Artoria Alter's character speak words and display deeds like those of a "tyrant's", which is the exact opposite of her usual character, but there is no change in her goals and ideals themselves, and it seems she shows a bit of her original self as her feelings towards the people who are close to her have been left behind and intact, although barely. The usual Artoria persisted in being chaste for the sake of her ideals, but this Artoria approves tyrannical rule for the sake of her ideals. Having been violated by the curse of the Holy Grail, this is a side of the King of Knights, a tyrant that persisted in being heartless. Maybe, the "ideal king" that King Arthur pursued was something like this after all. Maybe because her Magic Core goes outside the scale, but at any rate, Artoria Alter is a Servant that eats a lot. The dragon is a glutton. In addition, even her food preferences, which could be regarded as her identity, have changed: she spits out cooking with courteous, elaborate, abstruse tastes as bad and chews down large quantities of junk food. A new identity for Artoria who came into contact with the foundation of foreign cultures, as if food culture has become a Heroic Spirit. Concerning her who has an evil heart that is outside of the norm, meals become nothing but refreshing fuel, and it seems the manner of being able to eat food in a simple way is desirable for her. Awful eating habits, but she herself seems greatly satisfied, so maybe this can be called a form of happiness. Concerning her motive on what to wish for on the Holy Grail and what rouses her to pursue it, it is no different from Artoria's. However, affirming her strength to the point of committing atrocities, she not only responds to the desires of a Master wishing for a strong Servant because of their objective to fight and save the world, but she responds to also do battle against the Master's more repulsive enemies and the more powerful adversaries, as well as to train the Master in improving their skills. Her methods surely differs, but her approach to guiding and understanding the Master is certainly Artoria Pendragon's. In addition, in the world of Fate/Grand Order, her existence as a Servant is separate from Artoria Pendragon's, and Artoria is no longer consumed by the blackening caused by the curse of the Holy Grail.