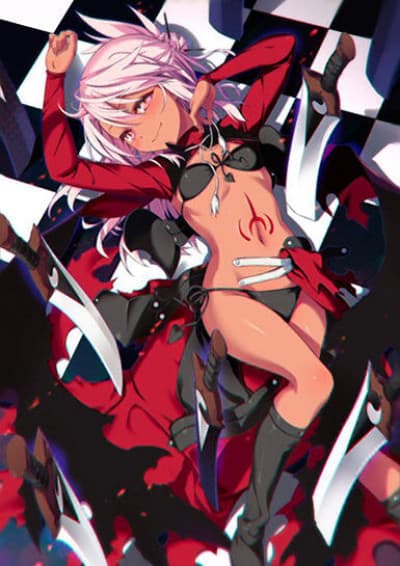 Chloe von Einzbern, also known as Kuro, is a twin existence formed from Illya's original self in Fate/kaleid liner PRISMA☆ILLYA. She also appears as Archer, an Archer-class Servant summoned by Ritsuka Fujimaru in the Grand Orders of Fate/Grand Order. Chloe is a young girl with tanned skin color and white-rose like hair. Her Archer form her clothing consists of a feminine version of EMIYA's servant clothing. While at school she wear the typical school uniform. Generally speaking she looks like a palette swapped version of Illya. Despite having an overall similar appearance with Illya (except her eye and hair colors), Chloe often styles her hair differently from her. Kuro is generally much calmer and more nonchalant than Illya. She is devious and manipulative, picking up on subtleties about people and using them to her advantage, and she can be very brazen and unrestrained in her actions. She has experienced all of the same events as Illya, allowing her to recall events before she manifested. Kuro is deeply bitter as a result of having been sealed, both towards her parents for sealing her, and toward Illya for wishing to be 'normal'. She believes Illya is indirectly wishing for her, the manifestation of her past as part of a Magus clan, to not exist. She places pride in the reason she was born, and wishes to follow it if she can. The idea of being called a second hand clone infuriates her, for the name 'Illya' originally belongs to her. Kuro easily gets into conflicts with Illya, fighting over any minuscule insult. Funnily, when Illya is unable to stop Kuro in some of these conflicts, she uses the effect of a curse to inflict pain on Kuro by hurting herself. Due to Kuro's appearance and her tendency to drain energy through kissing, it creates certain comedic situations and misunderstandings. Despite these problematic aspects of her personality, underneath it all is a caring, sweet, and even timid girl fitting of her age. This reflects her vulnerable side on how despite everything, what she truly desires is a family, a normal life, and above all, to live with a purpose. When she was finally granted these wishes, she becomes more well behaved but still mischievous. Kuro is straight-forward such as stating that one should face a problem instead of avoiding them, and immediately choosing her friend Miyu over saving the world. This also shows her deep devotion towards those she desires and deeply cares about. Kuro also shares Illya's affection towards their brother. However, she is more forthright with Shirou (similar to the Fate/stay night counterpart of Illya), allowing herself to express the feelings Illya has not been able to express. Kuro became jubilant when learning that the identity of the Archer Class Card, that was used to manifest her body, is EMIYA.