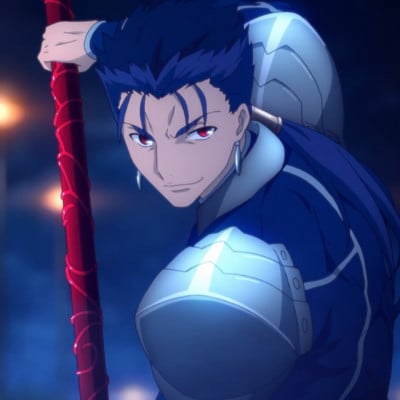 Cú Chulainn, Class Name Lancer, is the Lancer-class Servant of Bazett Fraga McRemitz in the Fifth Holy Grail War of Fate/stay night. He becomes the Servant of Kirei Kotomine after Kirei fatally wounds Bazett, and remains under his command for the duration of the War. Caren Hortensia acts as his Master during the events of Fate/hollow ataraxia. He is the Servant of Rin Tohsaka in the Moon Cell Holy Grail War of Fate/EXTRA. While he is always featured in the story, he is only fought as an enemy in the Rani route, while another Lancer is fought in the Rin route. He is one of the Servants of Ritsuka Fujimaru of Grand Orders conflicts of Fate/Grand Order. Cú Chulainn is a blue-haired, red-eyed man whose primary outfit is a deep ultramarine full body tights covered in Runic protections, grey metalic pauldrons, and a metal plate over his lowest abdominal section. He wears his hair in a rattail that reaches his mid-back. He also wears a pair of silver earrings. Lancer gives off the impression of a beast, even carrying a bestial smell. In Fate/hollow ataraxia, Lancer usually wears a yellow Hawaiian shirt and black pants when he's not working one of his part-time jobs. In Today's Menu for Emiya Family, Lancer's casual outfit consists of a white T-shirt, black pants and a black jacket. Shirou found it a mystery that Lancer could wear an apron and look good in it. In the Fate/EXTRA series, Lancer's outfit covers his entire body with light blue lined design, with some black sections, grey metalic pauldrons like his original design, and a light flame design on his left arm. Lancer is a fierce, but balanced warrior who enjoys combating a worthy opponent, but at his core he believes in justice and is easy to get along with. He is an agreeable youth acting out the role of one gentle in disposition yet strong in body.[11] He has a playful attitude and takes a very carefree approach to life, but is quick to work himself into a frenzy during a heated battle. He was known as a brave, compassionate, and likeable young man in the legends. He mercilessly killed his enemies on the battlefield, but he respected faith and had the nobility to never once break a promise he had made. He enjoys fishing, hunting, and hitting on cute girls. He is a proud warrior, someone who can't abandon a fight just because he's losing. He's ready to fight until the end, for the sake of his fighting will and also for his Master. He easily loses his cool, especially to insults calling him a dog. He's not interested in killing innocent people, though he still strictly follows the rules of the war to kill bystanders like Shirou. He's very keen on his mission and somehow professional in his "work". He's noble and he can't really stand people who're joking with him or simply betraying his trust. He's also easily touched by others problems and if he chooses to protect someone, he will do his best till the very end. He really enjoys dating women or simply to spend his time in relaxing hobbies like fishing. He regretted nothing in his life, though it was one full of wrong turns. There may have been disappointment, but he does not regret his life one bit. His spear only took away the lives of his loved ones, his close friend and son, but its only regret was that it had been meant to murder a single woman that he was unable to kill. Though it is impossible to swap one's life for another, he thinks saving Bazett from the looping world may allow him to leave the regrets of his youth behind. He only has a complaint about his fate as he tries to save her, that he never has any luck with good women.