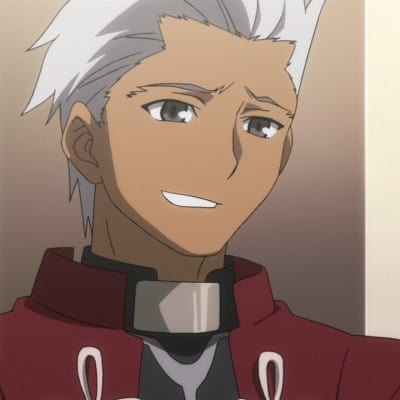 EMIYA, Class Name Archer, is the Archer-class Servant of Rin Tohsaka in the Fifth Holy Grail War of Fate/stay night. He is one of the Servants of Ritsuka Fujimaru of the Grand Orders conflicts of Fate/Grand Order. Shirou from the Fifth Grail War would grow about 20 cm as Archer. It is uncertain if his extreme height growth is caused by magecraft. Compared to Shirou, Archer also has short hair with the exception of being white and swept backwards, gray eyes and tanned skin colour. His skin, hair and eye colors are different to his younger self due to the extensive use of projection magecraft that caused a rebound effect. His servant clothing, Red Plain Mystic Code is Archer's signature costume. He wears a black body armor made from a special material that has yet to be discovered by mankind as of the present time, which consisted of a black tight and sleeveless shirt with sliver accents which outlined his muscles and a metal plate on his collar, and black pants that had two black straps on his thighs, and another two strapped around his shins separate from each other. He wears black metal plated shoes, which appear to be attached to his trousers. His signature red coat is a type of holy shroud, which were actually two separate sleeves connected by a metal plate at the back which covered his arms and was cut off showing his upper torso and midriff, and had a separate red open skirt which ended above his shins with the top fashioned and tied with an agemaki knot, covered by a silver metal plate. In Fate/hollow ataraxia, Archer is seen without his holy shroud as evidence that he isn't looking for a fight. In one of the loops, he also wears black bow gloves. His casual attire consisted of a plain black shirt, black trousers and heavy boots. When he went fishing, he wore his signature clothing without the holy shroud. Instead, he wore a red down vest jacket and a red cap hat. In his past, Archer has been seen wearing a pale-coloured cloak in the Ufotable adaptation of Unlimited Blade Works. His personality is very contradicting. While he is thoroughly cynical and nihilistic, he is at the same time devoted and protective, and even a little childish to the point that it makes him hard to hate. He does not lie, but he does keep secrets and tell half truths. He means well and is capable of being nice, but often ends up being sarcastic, especially so when he gives advice. He cannot approve of Shirou’s ideal of becoming a Hero of Justice due to his own experience, but at the same time he cannot deny it for the very same reasons. Archer is a very bitter person not because of the events of his life, but because of his status as a Counter Guardian, a being that is forced to "clean up the messes humanity has made". Although he was constantly betrayed by those around him, he never held any grudges towards anyone. Even so, he despaired over the fact that he could never live up to his ideal of "saving everyone regardless of friend or enemy." The reason he chose to become a counter guardian was because he believed that he could save as many people as possible and in a way this was true, but the reality was that the Counter Force merely sent him to a point in time where it believed humanity was on the brink of collapse and had him kill any and every person it had deemed to be the perpetrators irrespective of the fact if they were good or evil. He believed that gaining power as a Counter Guardian would help him save everyone, but it was a mere continuation of his life's work where he had to sacrifice a minority for the good of the majority. In the end, he was even betrayed by the one ideal he believed in. Following his experiences with Shirou in Unlimited Blade Works, he takes a new approach, accepting that while his old ideals were immature they were not wrong either. Since then, he has mellowed out considerably, and in Chaldea he has a reputation for being overprotective. Because of his employment as a Counter Guardian and his subsequent summons into all eras throughout history regardless of past or future, the record of the Heroic Spirit Emiya on the Throne has very fragmented memories. The only memory regarding the Holy Grail War he has is a hazy one of the moment when he first met Saber. He no longer feels beauty from the moment as he did during his life, but the moment itself is stored in his soul like a picture. He claims that his memory is confused to the incomplete nature of his summoning, but that is only half truthful. He is able to assess the situation and deduce his circumstances the night of his summoning, believing himself to have the opportunity to achieve his goal to kill Shirou. He had forgotten the name "Rin Tohsaka" over the period of his life, but remembers her the instant she introduces herself. Murmuring "――Rin. Ah, that's the name――" under his breath, it is a statement from his heart filled with "much endearment close to insanity." He claims to no longer have Shirou's memory, but remembers the day Kiritsugu Emiya saved him and the feelings he felt upon seeing Kiritsugu's smile. He has a fond remembrance of the moment Saber was first summoned that he will always recall vividly "even if he should fall into the depths of hell." He's not interested in video games but he is willing to play, once he gets started. Archer gains much joy and pride in housework, especially cooking much like Shirou himself, and helps to run Chaldea's cafeteria. He, however, denies that he enjoys doing them.