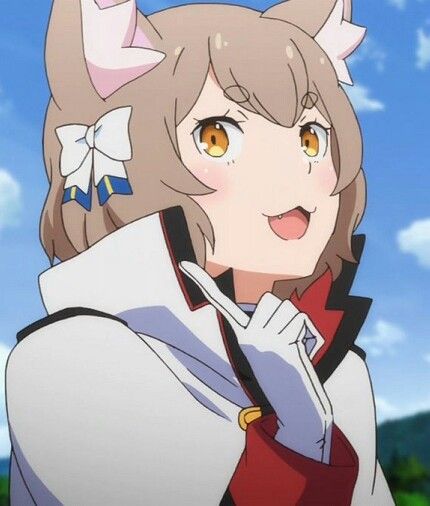 Felix Argyle, commonly known as Ferris, is Crusch Karsten's knight. Debuting in Arc 3, he played a rather vital role as Crusch's knight and supported Subaru in his fight against the Hakugei and Sin Archbishop of Sloth. Though not present in the following 4th Arc, he reappeared in Arc 5 and yet again played a vital role for Crusch's character development. Ferris has flax colored hair and yellow eyes. His casual wear consists of a blue collar with a ribbon, a blue dress, black tights, blue leggings, blue shoes, white arm covers, and a blue scarf tied around his right arm. Ferris' cat like appendages are a result of his ancestors having Demi-Human blood and because of this, he was mistreated by his parents. The white and blue ribbons that he wears in his hair are a gift from Crusch and he always wears them no matter what he's wearing. Ferris usually refers to himself in third person, calling himself Ferri-chan, though he will refer to himself as Ferris, Felix, or with female pronouns depending on the situation. He is absolutely loyal to Crusch and will do anything she says, however he will oppose her if needed. He also enjoys teasing other people, especially those that are surprised that he's male, using cutesy language and gestures to agitate them. Although he hides it through his actions and words, Ferris has a severe view on death and values due to his job as a healer, leading him to hold those who no longer have any will to live in contempt from the bottom of his heart. He also hates weaklings because of his complex, causing him to hate Subaru for a while, however he lets go of his feelings against him after seeing his actions during the battle against the Hakugei. Ferris can get emotional when it comes to Crusch, such as the time when she was infected by Capella's dragon blood, becoming visibly stressed by her poor condition and even going as far as to demand to see a captured Sirius so he could torture her to gain information on how to cure her. He is constantly thankful for Crusch and everything that she's done for him in her life.