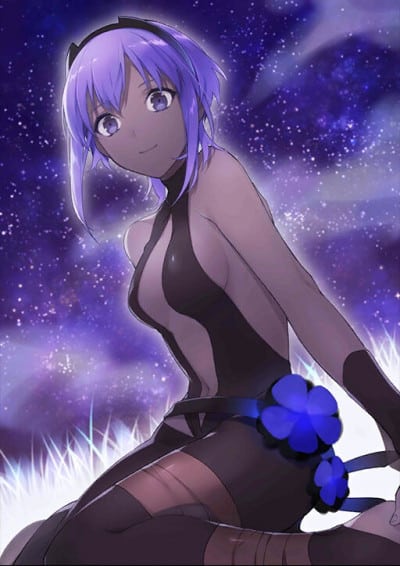 Hassan of Serenity, Class Name Assassin, is the Assassin-class Servant of Seiji Jinga in the First Holy Grail War of Fate/Prototype: Fragments of Sky Silver. She later forms a new contract with Manaka Sajyou. She is summoned by Ritsuka Fujimaru in the Grand Orders of Fate/Grand Order. An assassin who wears a skull mask. Serenity's appearance is typical of those in her Assassin Order. Like all of the other Hassans, she wears a black, form-fitting outfit and the traditional Hassan's skull mask. Her outfit is very similar to the one worn by Asako of the Hundred-Faced Hassan, her violet-colored hair being another trait they share. Unlike the Cursed Arm Hassan, Serenity never actually carved out her face as it was one of her greatest tools. Her "face" during infiltration missions is basically something created through the Shapeshift Skill, but the "face" in her third stage Ascension is her natural looks. Due to the nature of her assassination methods, she has natural looks. Her shapeshifting allows her to better refine her features to lure in her targets. As her name implies––––– a calm female assassin. Obedient, and lacking self-assertion. While she was alive, she was merely a girl who conducted assassinations very mechanically. Even now where she became a Heroic Spirit, those characteristics have not changed as much. However, towards people who does not die even if they had touched her, she is quietly fanatical, and she shows devotion to them. Would one live if they touch her, or would they die? This is the point she views as the most important. For example, if the Master has a strong resistance to poison, it would be something serious to her. She will cuddle up. If it is the former, it seems she would dedicate her unconditional loyalty. If it is for the sake of her master, she will do literally anything. For example, even if a genocide comes about, her facial expression does not even change, and she displays obedience without even talking back. Concerning her, who naturally accepts that “everyone will die if they touch me”, the existence of “a master who does not die even if they touch me” becomes her best delight. As an assassin, Serenity is very pragmatic with her methods. After losing her first Master, she took to killing other men to maintain her existence by luring them to her thanks to her appearance. As natural of her previous profession, Serenity is quite skilled at deception, particularly in lying to others. She was able to quickly come up with a believable lie to explain to Ayaka for her presence in the Sajyou's home upon their encounter, while also analyzing her own words for any potential holes and finding ways to cover them up. If Serenity had a wish, it would likely be able to love and touch another without killing them. It was for this reason that she likely did not stop Seiji from trying to kiss her, which resulted in his death, and why she chose to follow Manaka as she was unaffected by Serenity's poisonous body. As a strange quirk of her Spirit Origin, Serenity is incapable of remembering any point of time in which she fell in love. Should a version of her experience love and then perish, she will not return to the Throne of Heroes but cease to exist entirely. Even if the Holy Grail itself were used to resummon her, it would only be able to summon a different Serenity with a new Spirit Origin. The purpose of such an elaborate set of checks and balances is unknown.