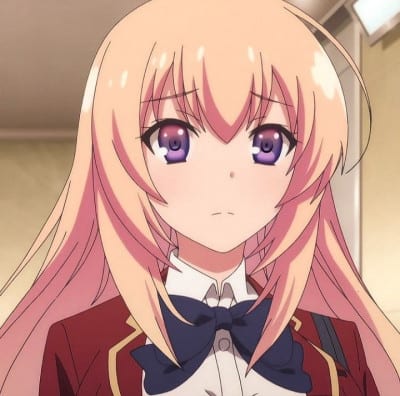 Honami Ichinose is a student and the class representative of Class 2-B. Honami is a teenage girl who is considered to be highly attractive by her classmates (she is even called beautiful by Kiyotaka Ayanokōji in the manga) with back-length strawberry-blonde hair, blue eyes, she possesses an extremely well-endowed figure that is a source of jealousy to Suzune Horikita and an average height. She is often seen wearing the school's standard uniform, but her clothing of choice varies depending on the context as when outside of school, she was seen wearing a white frilly shirt and dark blue pants. At the swimming pool, she wore a bikini with her top tied in a ribbon knot. During the survival test, she wore a red tracksuit with a white shirt beneath it. Honami is a kind-hearted and altruistic person, and extends this side of her personality even to those of the lower classes, unlike many other upper-class students. This was seen when she prevented a brawl between Class 1-C's students and one from Class 1-D. Her kindness has also allowed her to become friends with Kikyō Kushida and Kiyotaka Ayanokōji, despite them both being students of D-Class which was looked down on by other classes. Even though she rejected the romantic feelings of an admirer who was also a close friend of hers, she held back from using any harsh or hurtful words and still honestly hoped to remain friends with the person afterwards. She appears to keep her word, as after Kiyotaka helped her, she acknowledged that she owed him a favour for his actions and when offering him help, she reminded him of this debt. She continued to help him by gathering evidence to prove Ken's innocence. Honami even assisted Kiyotaka in saving Airi Sakura though she was under no obligation to do so, showing her generosity. She is rather humble as in spite of her great talents and beauty, she is not at all boastful about them but remains level-headed and speaks to all her peers, even those in the lesser the same way. She appears to have a trusting side, as she went as far as asking Kiyotaka, who she just met if he would pretend to be her boyfriend as a way to help her solve the relationship issue she had. This was seen again as she allowed him to borrow her phone when he asked for it. She enjoys teasing people, as shown when she brought up Airi's close relationship and her obvious romantic affections for Kiyotaka (despite once asking him to pretend to be her boyfriend), though it was shown to be all in good fun, as after her own close relationship with Kiyotaka was mentioned by Kikyō, she simply smiled. She rarely gets mad, although when the situation called for it, she adopted a serious side to herself which was shown when she reprimanded Kakeru Ryūen and students of C-Class in their bullying of Ken and they complied without protest. This side of her was seen again when she helped Kiyotaka to apprehend a man who was attempting to assault Airi and told the man to be silent after he protested and gave him a look of disgust for his actions. She is somewhat shy, as after getting a love letter from her friend Chihiro Shiranami, she was seen blushing while she nervously spoke about the letter. She then admitted to Kiyotaka that she had no idea of what it meant to be a couple with someone or how to let a person down without hurting them. This showed that she had not yet experienced any romantic situations and does not know how to face them but it is unknown as to whether or not she ever had a romantic interest in someone. This shyness was seen again when she hesitated in talking about the growth of her breast size to Suzune Horikita after she asked about her chest development. She seems rather secretive, as she was quick to reclaim her phone when Kiyotaka noticed the number of points she possessed. This was seen again as she spoke to Ryūji Kanzaki and hid her phone before talking to him about points though she was very vague in her query. Due to this, she appears to understand why others hide their own secrets as shown where she recognized the true intelligence of Kiyotaka and saw that he was someone who shouldn't be in D-Class but had enough consideration for his privacy that she didn't push the issue when he didn't seem like talking about it. That being said, she still maintained a curiosity about him, as seen in a conversation with her teacher on the cruise.