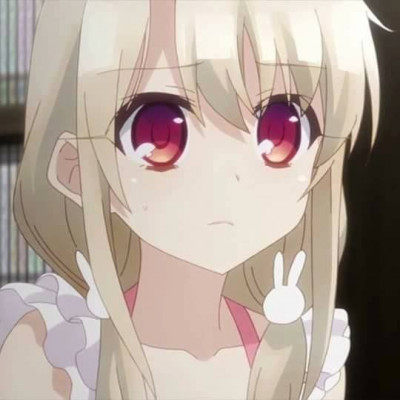 Illyasviel von Einzbern is the main protagonist of Fate/kaleid liner PRISMA☆ILLYA. She also appears as Caster, a Caster-class Servant summoned by Ritsuka Fujimaru in the Grand Orders of Fate/Grand Order. She has basically the same appearance as her Fate/stay night counterpart, even though here she is younger. Being originally an Einzbern homunculi, Illyasviel has red eyes and long silver hair just like her mother, Irisviel. She wears many casual outfits but the more recognizable ones are her regular school uniform, summer school uniform and her pink Magical Girl outfit after contracting with Magical Ruby. While using Magical Sapphire, she wears a purple outfit, a little bit different from Miyu's. In the Zwei Form where she wields both Magical Ruby and Magical Sapphire, her outfit changes to a purplish color with and she obtains cosmic-like wings. As a Card User she is able to install Class Cards and to obtain outfits and equipment of various Heroic Spirits. She only becomes able to do it by herself during her first fight with Beatrice Flowerchild. When she installs the Saber Class Card, instead of summoning the King Arthur, Artoria Pendragon, she brings out the Princess Knight side of her. Illya exhibits a cheerful and positive attitude; but unlike her counterpart, she is shy, easily flustered, and more innocent at the beginning. In her first fight, she is shown to be agile but rather cowardly. Also, Illya is an ardent fan of anime, much to Sella's disappointment. She secretly harbors feelings for her brother, Shirou, something that Ruby highlights frequently much to her embarrassment. She is also rarely (if ever) clingy when with him unlike her Fate/Stay Night counterpart. When interacting with her friends at school, she shares a dynamic relationship with them where she usually acts as the voice of reason, a role that is very much like a Tsukkomi (a person who throws punchlines). This is particularly expressed when it comes to suggestively lewd or comedically immoral situations. She has a rather intense fascination with maid outfits, though she does not like the official Einzbern maid outfit Sella puts on at one point. As the series progresses, Illya matures into a strong individual who's willing to face overwhelming odds for what she cares about while also maintaining her innocent nature and strong morals. This is proven when Illya also wants to protect everyone, especially her friends. It is shown as Illya proclaims that she will help Miyu and her world, even though Julian stated that it is almost impossible. This characterizes the immeasurable amount of kindness Illya possesses that she is considered a natural genius in becoming friends with her enemies. Despite her growth in maturity, she still holds behaviors fitting of her age such as childish tempers, trying to act mature, and being stubborn towards things she dislikes. Like all young girls her age she adores cute things like animals and stuffed toys. In stark contrast to her original version, she really likes cats.