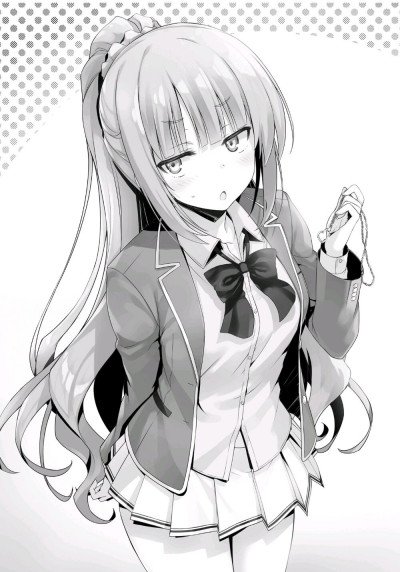 Kei Karuizawa is one of heroines of the You-Zitsu series as well as a second-year student of Advanced Nurturing High School. She is a prominent figure in the class and is considered to be the girl's leader of Class D. She is the girlfriend of Kiyotaka Ayanokōji. Kei is a teenage girl of average height with waist-length blonde hair that is tied in a ponytail and purple eyes. Her school uniform consists of a light blue dress shirt below the red school blazer with rolled-up sleeves and a short white skirt. She walks in standard school shoes with light blue calf-length socks. She predominantly wears a blue ribbon around her collar. In a more casual situation, she simply wraps her school blazer around her waist and rolls up her dress shirt sleeves above the usual norm. She takes immense pride and care in having a pulchritudinous outward appearance and is known in the class to be one of the most fashionable and modish student in her class. At the start of the series, Kei comes across as a sloppy and spoiled girl who only cares about herself. She spends most of her time with the girls after school and uses her points to buy clothes and accessories. She is admired and feared throughout the class for her strong personality and her status as Yōsuke Hirata's girlfriend after only two weeks of entering the school, therefore establishing her position as the girl's leader of Class D. However, despite her looks and attitude she displays, she has her fair share of secrets that she cannot afford to reveal to others. She was unabashed and unashamed by the comments made by other people for describing her audacious moves on boys that caught her eye. Underneath her pompous mask that she wears in front of people, Kei is a girl tormented by the ghosts of her past who can be weak and sensitive towards her surroundings. Even though she gives off the impression of someone who is careless, arrogant, and messy, Kei's true self is very logical and astute with a sharp mind. She has remarkable ability to read the environment and the people around her, and makes the correct decision often. She is a self-aware person who knows better than anyone her own character and limitations. She also seems to have developed a cynical view of her surroundings and relationships. She believes everyone hates her and only took an interest in her due to the position and status she has in the class, making her very wary about her actions towards her friends to remain in their good graces. When interacting with someone she trusts, Kei is a straightforward and outspoken person. This is seen in her interactions with Kiyotaka Ayanokōji, as she has expressed many dissatisfactions with him during their time working together. She also often calls out his lack of common sense regarding ordinary matters such as maintaining conversations during the series, and is the only person thus far who is actively trying to improve his bad habits. In a school that is anything but ordinary, Kei tries to live in the most ordinary way possible and spends most of her time having fun with her friends. She is very connected to fashion and fancy things, which contributes to her having an extravagant and lavish lifestyle causing her to spend money irresponsibly. That said, she had gotten past this mindset and was shown to saved a great deal points just so she could save herself from expulsion if it ever came down to it. So far, she’s not shown much interest in academics or a great desire to reach a higher class. She often leaves to study for exams at the last minute and is not fond of studying in general. Her dislike for studying is mainly due to the lack of chances she had to attend her classes consistently during middle school due to her past. Kei entered the high school without much of the theoretical grade of middle school, which made her experience studying in high school not very pleasant. However, if her friends ever request her assistance or she was ordered by Kiyotaka to do something, she spares no expense and goes out of her way to achieve better result than expected of her.