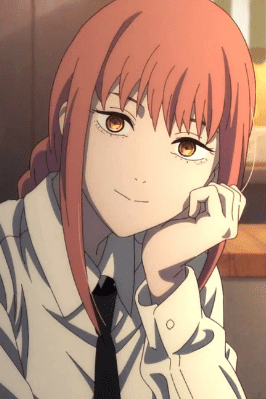 Makima was a high-ranking Public Safety Devil Hunter, who took Denji as her human pet. She is later revealed to be the Control Devil which embodies the fear of control or conquest. Following her death, she is reincarnated as Nayuta. She was the main antagonist of the Public Safety Saga. Makima is a beautiful woman who appears to be in her mid-twenties. Her hair colour is a light red, normally kept in a loose braid with bangs reaching just past her eyebrows and two longer side bangs that frame her face. Her eyes are yellow with multiple red rings within them. Her outfit consists of a white long sleeves white shirt, a black tie, black pants and brown shoes. On the surface, Makima seems to be a nice, gentle, social and friendly woman, she is seen almost the entire time wearing a smile on her face and acts relaxed and confident even during a crisis, speaking in a professional tone to her workers. However, this is only a facade that she uses to fulfill her ultimate goal: After the death of Aki Hayakawa, Makima begins to reveal her true colors to Denji. Makima's true face is of someone machiavellic, calculating, who sees people around her as nothing more than "dogs" she can use as she much as she likes and must obey her without any hesitation. Makima has demonstrated to be extremely cunning, cold and manipulative. She controls Denji through the promises of a romantic and sexual relationship while also threatening him with extermination if he disobeys her. Ruthless and normally dispassionate, she will do whatever it takes to reach her goals, even at the cost of the people she should be protecting. Makima also realizes that she is not a good person and deems herself as "necessary evil"; a weapon under control of Japanese government, just like Gun Devil which is under control of Americans. She is not afraid of her plans derail, since whether her plans fail or succeed, she will achieve something she wants. Makima is an extreme fan of Chainsaw Man, the "Hero of Hell". Fascinated by its ability to wipe out the embodied concept of a devil through consuming them, her stated goal is to bring Chainsaw Man under her control in order to use its abilities to create an ideal world without fear, death, and “bad” movies. However, failure is also acceptable, as it would mean being eaten—an honor according to her. Makima's true goal, however, was to be together forever with Pochita and lead a happy life with him. She always yearned for something like a family, being incapable of forming equal and meaningful relationships as the Control Devil.