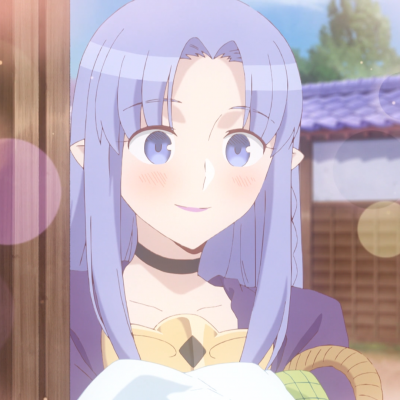 Medea, Class Name Caster, is the Caster-class Servant of Souichirou Kuzuki in the Fifth Holy Grail War of Fate/stay night. She also acts as the Master of another Servant, Assassin. She is also a Masterless Servant in the Subcategory Holy Grail War of Fate/Labyrinth, and one of the Servants summoned by Ritsuka Fujimaru in the Grand Order conflicts of Fate/Grand Order. Caster's appearance is much like a witch that would be seen in a fairy tale. She wears a hooded bluish-purple robe throughout Fate/stay night, and her appearance remains hidden for most of the story. Her face is only shown briefly after being slain by Archer during Unlimited Blade Works, she is noted to be an incredibly beautiful woman. Her noticeable facial features are her knife shaped ears. She generally wears a much more casual attire during Fate/hollow ataraxia to match her attempts at being a normal wife for Kuzuki. The outfit consists of a black top with a jean jacket and long tan skirt. She still dons her robe if she has to enter into battle. Cruel and cold-hearted, she is a genuine wicked woman who does not choose the means to achieve her objectives and makes evil designs her forte. However, such personality was established as a reaction of the fate imposed on her. A tragical woman who, a result of constantly facing betrayal, ended up falling on the standpoint of betraying people herself. As she began to betray her original Master, Atrum Galliasta, Caster was shown to possess a surprising amount of morality as she freed the children that Atram had planned to sacrifice, before completely destroying his workshop. While she was about to disappear after killing her first Master, she lamented that she would disappear before being able to fight. She would disappear unable to do anything as a pitiful Servant summoned only to be trampled upon. While such a situation was vexing, it was not out of the ordinary for her. It had always been that way for her, as she has always been used as a tool by others. She had always been treated unreasonably, and she was never once understood by anyone. Her life was always controlled by someone else, and her mind was destroyed at a young age to save a hero chosen by the gods. She was cursed to blindly love a man she had never seen just because he was favored by the goddess of beauty, which led to her being forced to betray her own father and country. She was originally an innocent person, but after suffering from repeated betrayal, she thought "Hmmm, fine, I might as well sink to rock bottom". Because of this, she was tainted by evil. She has no true memory after that point. She was brought to an unfamiliar country after betraying her father for a man, and made into a witch that cut apart her own brother and threw the pieces into the sea to escape her native country. After all that happened, even the man who had wanted it done cast her aside in order to become king after saying he could not marry a witch. Her origin is that she was controlled and taken to an unknown country, marked as a witch, and thrown away by the only person on which she could rely. There is nothing people can blame her for, and while the people around her were aware of that fact, they still demanded for her to be a witch. People wanted a convenient scapegoat that they could blame for any disaster, whether it is an evil to protect the king or an evil to be on the end of evil superstitions. She was part of an unchanging pattern where people demand easily understandable evil to reassure themselves of the own goodness. She was considered the perfect sacrifice in that regard with the only person she could rely on, her father, in a distant country. Nobody defended her, and they gladly blamed her for all the ugly things in the world. They decided every ugliness was the witch's doing, from being poor, to hating others, the fact that humans are ugly, or even that people die. She merely accepted that fact, and she decided because she can only live as a witch, that she would act as a witch. She imposed such a reason of existence on herself as it is the only role people gave to the girl called a witch who never had a free will. She swore to show them the ugliness of their wishes that they demanded of her. If they do not know their own ugliness, they can stay ignorant, go to hell for their own crimes, and suffer forever. They won't be able to get out of hell, where they will suffer forever as criminals because they do not know what crimes they have committed. Nobody actually wished for such a thing, and neither did she wish for it. She seeks revenge against her will, without having any wish for herself. Her entire outlook changed upon meeting Kuzuki. Her main talents lie in plotting and crafting plans. She likes reticent men of sincerity and girls in adorable clothes, and she dislikes muscles. She's merciless against mature women. She doesn't like to be called a "witch", and while she will forgive someone once, she will prepare an appropriate punishment for those who call her a "witch" twice. In the manga adaptation, it is revealed that, Caster has gone psychologically insane at one point in her life, and she did so again following Kuzuki's death. She enjoys playing cooking lessons simulations on the NDS.[6] While she is still a novice when it comes to actual cooking, the Grand Order storyline revealed that Caster possesses remarkable skills when it comes to building models, especially model ships and diorama of locations, which she also enchants.