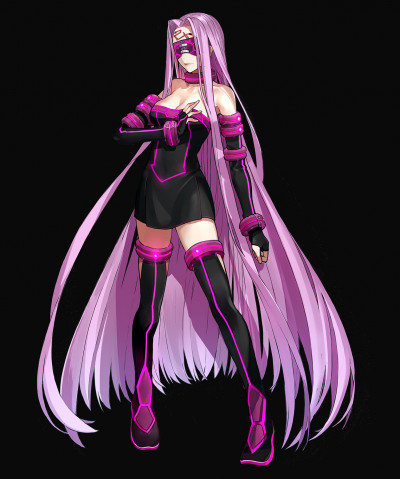 Medusa, Class Name Rider, is the Rider-class Servant of Sakura Matou in the Fifth Holy Grail War of Fate/stay night. Due to Sakura's unwillingness to participate as a Master, Shinji Matou is instead given control over Rider. She only truly acts as Sakura's Servant when their connection is revealed in the Heaven's Feel scenario. She is one of the Servants of Ritsuka Fujimaru of the Grand Order conflicts of Fate/Grand Order. The Medusa materialized in the Fifth Holy Grail War appears differently to her legend. She appears to be in her human form, unlike her legend where she has snake for her hairs, she has long purple hair. She wears an eye cover that seals her excessively powerful Mystic Eyes of Petrification within the Bounded Field. Her sight is completely sealed. Although Rider perceives the world through senses such as hearing, touch, smell, and magic-detection, she is able to acquire more precise information than sight. She has a complex about her own height and the way she gets embarrassed when people see her Mystic Eyes, she might actually be pretty ladylike. Because of her outward appearance and primary weapon, a lot of people thought she was going to be an Assassin class Servant. In her casual attire, she wears a black polo neck top and blue jeans. She wears Touko Aozaki's "Mystic Eye Killer" to disable her Mystic Eyes. It only seals the power of petrification. It does not act like the Breaker Gorgon, which "seals all magical properties". Concealing her eyes with a mask, she is a hard one to understand. However, it is not that she doesn't have much in the ways of emotion; rather, she is the type that thinks too much and ended up stuffed with emotions inside. In battle, she is ruthless and without mercy, willing to prey on unrelated innocents without hesitation if it's by her Master order in the Holy Grail War. On the other hand, she displays a degree of kindness to those who are not antagonistic towards her Master. Rider is silent, sultry, blunt, and vigilant, never hesitating to shield her Master from harm. She is always faithful to her Master, even with Shinji acting in that role most of the time. She is not openly talkative, and she prefers to analyze people and their actions. She is very protective of Sakura and willing to sacrifice herself for Sakura's happiness. She is very logical and she doesn't act out of anger or instinct. Despite being a beauty, she tends to appear to have a merciless personality because of her thorny aura and cold behavior. Her appearing indifferent and coldblooded is simply due to her feeling it to be bothersome otherwise, according to Artoria. She loves alcohol and reading. Being summoned as Rider, it seemed like she had grown a fondness towards bicycles. A beautiful woman with a tall figure and outstanding style, but since for Medusa the criteria for beauty is "being small and lovely", seems she has a complex over her tall figure and mature style. As she materialize, that complex of her ended up stirred towards girls with petite builds such as her sisters. Due to being pushed around by her cruel and willful sisters, Stheno and Euryale, she ended up ingrained with a self conscious nature. It seemed that this sort of power relationship doesn't change even after they became Heroic Spirits, with her being abused by their unreasonable demands even in Chaldea. But despite this her and her sisters love each other with all their hearts. She, at the very least, displays loyalty towards her Master. Even if she thinks that there is something wrong with her Master's standpoint or orders, she is capable of serving them while killing her own personal feelings. Ferocious and terrifying, yet beautiful. She is fundamentally indifferent towards humans other than her Master, but she opens her heart to those she deemed worthy of her trust.