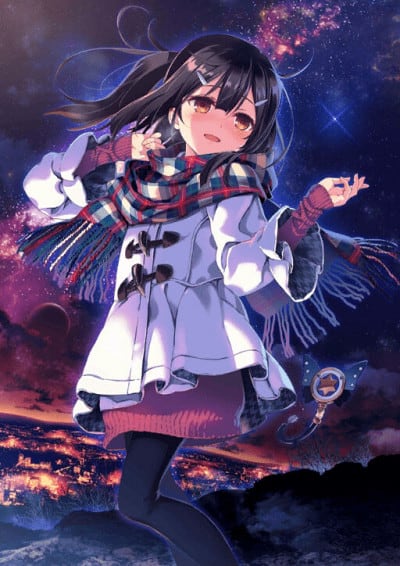 Miyu Edelfelt is a main character of Fate/kaleid liner PRISMA☆ILLYA. She also appears as Caster, a Caster-class Servant summoned by Ritsuka Fujimaru in the Grand Orders of Fate/Grand Order. Miyu is a young girl with black hair tied in low pigtails, and golden-brown eyes. As a normal girl, she wears the standard uniform of her elementary school with long black knee socks, and other outfits usually picked by Luvia. When she becomes a magical girl with Kaleidostick Magical Sapphire she wears a cute blue and black outfit with a white cape and boots. She also wears a strap on her left leg where she keeps the Class Cards. When she Installs the Saber Card, she wears an outfit that resembles the original Saber without the chest armor. When she Installs Rider, she wears the same outfit as the original counterpart. When installing the Archer Card containing Gilgamesh, she wears a armor and cape that resembles the original wearer except with the abdomen exposed. When being held captive by the Ainsworth, she wears a revealing black dress with her hair tied to the side by a blue flower. Before and during the Fifth Ainsworth Holy Grail War, she normally wears a kimono (a normal one and cooking apron). Her eyes were also notably red with a golden shine instead of golden-brown until she wished to be a real sister to Shirou, giving her Shirou's eye colour as proof of being biological siblings. When being used as a Holy Grail and granting Shirou's wish, she wears a black babydoll dress with three bottom ends that can shape the entire outfit like a cross. When she wears a kimono, Illya points how Miyu looks like a natural Japanese beauty. Originally, Miyu has a mature, dutiful, and rather unfriendly personality. She takes her duties as a Magical Girl very seriously and is initially dismissive of Illya's abilities. She is very knowledgeable that she tends to view everything more logically while explaining or exploiting the hard facts behind it, not understanding the emotions surrounding them. This side of her expresses how she lacks imagination and hints a sense of loss in child innocence. Despite this, she is shown to have vulnerable sides such being embarrass and being timid towards those who conveys acts of deep kindness and other possible overwhelming emotions like obsession. When she opens up to those she becomes close to (mainly Illya), she exhibits the capacity to deeply care and is very dedicated towards them. This creates two sides to her personality where she can very affectionate and devoted to someone she cares for, but extremely cold and dismissive towards anyone else. It is revealed in the past that she was originally stoic if not emotionless due to her duties of being the Holy Grail but showed sense of attachment. Her interactions with Emiya Shirou, who she eventually calls her brother, soon brought more color and emotions to her world while also bringing deep guilt and burden in her heart. This, along with the Ainsworth's treatment towards her, unveils the reason behind the personality she had when she was first introduced. Because of her upbringings, the guilt, burden, and turmoil within herself brought her great despair that she almost gave up on the idea of hope, but after Illya and her allies/friends saved her, she begins to show resolve. Like Illya, Miyu also seeks a path where everyone can be saved. She comes to value Illya's friendship greatly and is highly protective of her. This dedications goes as far as willing to risk her life for the sake of their friendship. She shows another side of her personality when she is around her brother, where she behaves like the young girl she actually is. These behaviours include wanting to be spoiled, like to wear animal onsies, and throwing a childish temper. After reuniting with her brother and having the entire group stay in the Emiya residence, it was shown that she likes animal-themed pajamas; and acts rather spoiled in front of her brother.