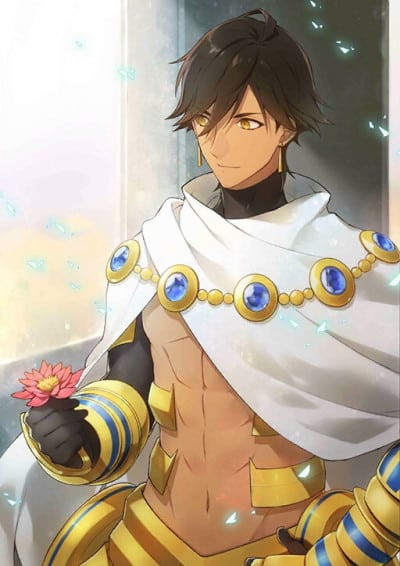 Ozymandias, Class Name Rider, is the Rider-class Servant of Shizuri Isemi‎ in the First Holy Grail War of Fate/Prototype: Fragments of Sky Silver. He is also summoned by Ritsuka Fujimaru in the Grand Orders of Fate/Grand Order. It has been conjectured that his height while alive was over 180 cm. However, Ozymandias himself has alleged that his height of prosperity/summit was back when his beloved wife, Nefertari, gave birth to their second prince. Ozymandias is described to be a man who had eyes like the sun, wrapped in the presence of a king. He seems to be vain in his appearance, not unlike Gilgamesh, as he wears modern, stylish attire, not to mention a gold necklace and bangles on his wrists. A Pharaoh filled to the brim with unswaying confidence. The Sun King. It is not arrogance, nor is it haughtiness. Ozymandias simply conducts himself as a god and Pharaoh that he is as a straightforward fact. That mentality completely savored the splendour of the world, having reigned over ancient Egypt at the time. He is a child of the Sun God Ra, while at the same time, his incarnation, stipulating himself as the absolute one above the earth. Just like a bird flying above the great skies, just like a fish swimming within the great seas, and just like a flower blooming in full glory in the plains, he is naturally a God-King (Pharaoh). He likes to refer to himself as the King of Kings, and also prefers being addressed as Ozymandias by other Servants and people. Ozymandias shows a personality of a person with a big ego, seeing himself as a god, but does not go as far as disrespecting the gods of his time. Unlike other demigods or beings with Divinity, Ozymandias is one that is not contrary to the law of the heavens. However, despite his respect for the gods, he declares himself to be the God of Heaven, Horus and Ra, to the point that he believes the gods are in his favor, and sometimes quotes the name of Nefertari as well, not only to show affection and love for her, but with a respect that places his beloved as someone divine like a goddess in life, asking for her blessing to his call. During his life, he calls Nefertari a manifestation of Hathor, the Goddess of the Sky and Love. Unlike Gilgamesh, he freely declares his True Name, Ozymandias, believing that the world should kneel by the return of his radiant presence. Ozymandias believes that his invocation was given by the need to save the world from its current state, to sort the current holder of a broken humanity, and that those who oppose him should be burned by his power. Although he enjoys battle and mentions that his fight against Arthur, Arash, and Brynhildr would be compared to his battle against the Hittites, Ozymandias says the position he takes between "fight or not fight" is the central motif of his fights to show Nefertari how powerful and victorious he is, and without her, there was no meaning in him fighting. For him, his tragedy was that there was no other fate than to rule the world. The failure of his life, in his eyes, was that he could not subjugate his journey towards the gods while dreaming of his rebirth at the end of the distant times like the other Pharaohs. Ozymandias' attitude towards his Master depends on his mood. If he recognizes one as having the disposition of a king, then this isn't bad from time to time, and he might say and take action under their rule. Even as he understands his present state as a Servant who cannot continue on materializing without a magical energy supply, he will not dangle his head down to a magus to begin with. He expects not to be treated as a Servant. He will take action when and only when his and the Master's goal coincide. Facing a man endowed with such a sovereign characteristic, one softens up their manner. A king is never an equal to a Pharaoh, yet it is quite well for a Pharaoh to watch over and guide the kings who are not a Pharaoh. Such is what Ozymandias does as he advances on his own. In other cases, if somebody who happens to resemble and (maybe) possesses a presence similar to his old friend (a saint) exists, he would take interest to them and inquisitively peer into their face. ... However, there is one major premise. To Ozymandias, his "beloved" will always be Queen Nefertari, and his "peerless friend" shall always be Moses. That alone, no matter the passage of time, will remain absolute and unchanging. In Fate/Grand Order, he gets along well with Gilgamesh.