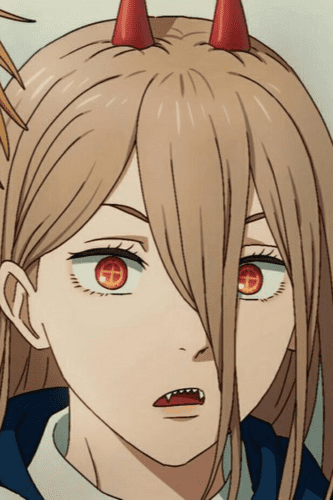 Power is a Blood Fiend and a Public Safety Devil Hunter who is part of Makima's special squad. Power has the appearance of a young woman with mid-back length hair. Her hair color varies from blonde to pink in manga illustrations, and appears blonde with a pinkish tint in the anime. As a fiend, she has red and yellow eyes that form a cross pattern, sharp teeth with defined fangs, and light red horns protruding from the top of her head. If Power accumulates too much blood, her horns become larger and more curved, and she can sprout additional pairs of horns from the sides of her head. Power usually wears the standard dress shirt, tie, and slacks required of Public Safety Demon Hunters. Normally, she wears breast pads to increase the size of her bust. She almost always wears her jacket hanging halfway off her body giving her an untidy, half-dressed appearance. During Operation: Super-Smart, Power donned a pair of glasses and tied her hair back in a ponytail. In her Blood Devil form, she appears as a tall humanoid with four arms and a mostly white body. Her head has a pointed appearance with a dark color, sharp teeth, and two circular eyes with cross-like pupils. She also has long ears and longer hair in this form. Her chest has an open rib cage showing a chest cavity full of intestines up to her neck. Her arms have dark coloration from hand to elbow. She has three-fingered hands and large claws. Her legs have the same dark coloration from the mid-thigh down, ending in heel-like feet. Power is childish, greedy, and almost entirely self-motivated. She tends to fight as if she has something to gain and is certain of her victory, and has no problems with running away from a fight where she is outmatched. She feels the need to boast her superiority over her fellow Devil Hunters due to her status as a fiend. She has no loyalty to humans or devils, openly admitting that she will join whichever is the winning side. Power is also rude, unkempt, and feels as though those around her should clean up after her. She self-admittedly rarely bathes or flushes the toilet and sees humans as being overly sensitive for caring about their hygiene so much. Power is a compulsive habitual liar; after getting in trouble with Makima for killing a devil when she wasn't supposed to, Power immediately blamed Denji and claimed he told her to kill it, she blamed Denji for eating all of the emergency food that the team collected even while she had crumbs on her face, and when accused of abandoning a fight because she was scared, Power falsely stated that she ran away merely because she was hungry. She has no problem gossiping and talking about her friends behind their backs; sharing the secret of Aki's shortened lifespan with the Angel Devil. Power sees no difference between pork, beef and human meat; being willing to eat all of them, even if the meat is disgusting zombie flesh. She hates vegetables, throwing them away when she finds them in her meal. Power is an insatiable glutton, eating all of the stored food that the team needed in order to survive the Eternity Devil's trap and hoarding food for herself at the Division 4's newbie welcoming party. When asked by Aki about what reward she could want as part of their mission, Power stated that she desired to suck a human's blood until they die. When promised Denji's blood, Power became ecstatic at the prospect. Though she is extremely selfish, Power was able to experience compassion for the first time towards her pet, after previously only caring about the smell and taste of blood and the feeling of death when she was killing something. This prompted her to act for the sake of another being when her pet Meowy was kidnapped. Power also begins to care for a select few close friends, such as Denji, as evidenced by getting him a birthday cake, and later putting herself in direct danger in order to protect him.