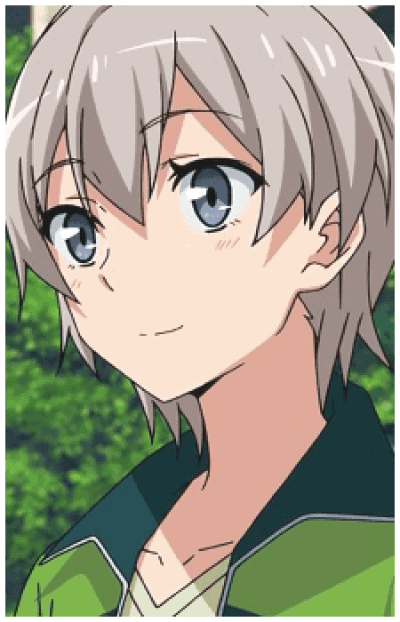 Saika Totsuka is a student of Class 2F in Sobu High School and a president of the school's Tennis Club. Saika has a soft, feminine appearance, and on occasion is mistaken as a female. Hachiman sometimes "forgets" that Totsuka is a boy. He has short, light grey/silver hair, large, sparkling blue eyes, and light skin tone. He is seen wearing his gym uniform throughout most of the series, often accompanied by his tennis racket, a towel around his neck or both. In the anime, his outfit consists of a dark and light green sports jacket, similar colored shorts with black knee length tights underneath, and wears a v-neck shirt that is long sleeved and a lighter shade of green in color. In the manga, his shorts are slightly longer and his undershorts are not visible. In the light novels, his clothes are exactly the same as in the anime, except his jacket is initially light blue and changes into green later in the novels, and his undershirt is short sleeved with a blue collar and is white. He also wears a black bracelet on his right wrist. Saika has a soft and kind demeanor, as well as a feminine appearance, which causes Hachiman on multiple occasions to "forget" Saika is a boy. Because of his feminine characteristics, most girls in the school call him "prince". This personality often causes his comrades and teammates to pursue victory in athletics or tennis. In contrast to his outward appearance, he is trying to be manly as possible, and doesn't like when his gender is mistaken. He is kind and loving to everyone. He is able to get along with everyone without any hard feelings. He is bashful and often shown blushing, especially to Hachiman. He is peaceful and doesn't like creating or being involved in conflicts. (for example, when Miura wanted to use the tennis court, he didn't say anything.)