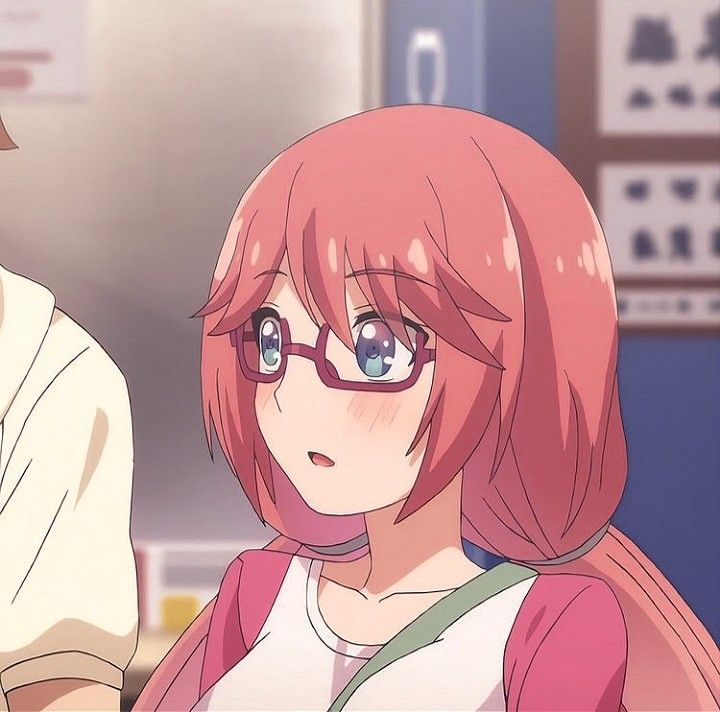 Airi Sakura is a former student of Advanced Nurturing High School. She was previously Class 1-D and in her second year Class 2-D. She is also a former gravure idol. Airi is a teenage girl of average height with butt-length pink hair that is tied in twin pigtails with bangs swept to the left side, gradient blue eyes, a very well-endowed figure and she is considered highly attractive to have advances being made on her by a sales clerk and a few of her classmates. She has a very well-endowed figure that was stated to be comparable to that of Honami Ichinose and it was also said that if she were as confident as her, her popularity could have been on the same tier. She wears red glasses which are later revealed to be fake by Kiyotaka Ayanokōji. Following an incident where she was assaulted, she abandoned them in favor of showing her real self but still kept them. When outside of school, she wears a white shirt with red sleeves and blue pants. She has also been seen wearing a rash guard swimsuit when at the pool. Airi has a shy and quiet demeanor as she mostly tends to stay in the background. This was best shown when she couldn't muster the courage to confess that she witnessed Ken Sudō's brawl with the students of C-Class, or when she couldn't bring herself to talk to her friends about the sale's clerk who was making advances on her while fixing her camera. She also has problems properly socializing with people, as shown when she was nervous being around her class at the pool. She has an exceptional ability of reading others, such as Kikyō Kushida when she was trying to be friendly with her while also hiding a malicious personality. She appears to enjoy taking pictures of herself, mainly, as she looks cheerful in every photo, she is in but not to the point of narcissism. This was mainly due to the high praises anonymous strangers showers her with which encouraged her to do more. She showed enthusiasm in wanting to take pictures of Kiyotaka as well while also fawning over how cool he looks. She is quite attached to her digital camera and was distraught when it needed repairs, and after being damaged due to a fall. After her terrible experience with a stalker and her rescue by Kiyotaka, she decided to reinvent herself by discarding her glasses and embraced the attention she draws. She is also somewhat self-conscious about her body, as seen when she chose not to wear a revealing swimsuit like other students despite doing photo several shoots in a bikini, and rather wear a rash guard. She developed an admiration for Kiyotaka Ayanokōji, due to his countless motivating advice inspiring her to do more than she would have done. This may have deepened as she was touched when he promised to help her whenever she needed him and acted true to his word by coming to her rescue after a crazed stalker tried to assault her. This is further supported as whenever she is in his presence, she heavily blushes whenever he looks at her and later, she developed romantic feelings towards him. These romantic feelings for him were brought up when she nervously tried to explain their relationship to Honami Ichinose, who playfully teased her. During the school cruise, Airi was seen practicing confessing her feelings to Kiyotaka and asking him out on a date, before being startled by his sudden arrival on the deck, and quickly changing her mind, by stating that she had wanted his help for something else instead. On the Deserted Island, there was one incident when Kiyotaka grabbed her by the arm, placed his hand over her mouth, and held her tightly against his body, to hide them from view of some Class-A students. This caused her to heavily blush a full red out of embarrassment. Even after he released her, she fell to the ground, still blushing as she nervously mumbled that she was fine, having Kiyotaka wonder if she was truly alright. She was later asked by Kiyotaka to come along with him to find branches to start a campfire after he had initially asked Suzune, who refused, and Airi was seen staring at him while blushing and sounding happy when he invited her. Airi was also shown to have wanted to stay paired up with him, saying that she was sad on the school trip at first due to not having friends, but then, she was glad that she had come. She then stated regrettably that she wanted to have her camera at that moment so that she could take a picture of him, hinting that she wanted to keep an image of him.