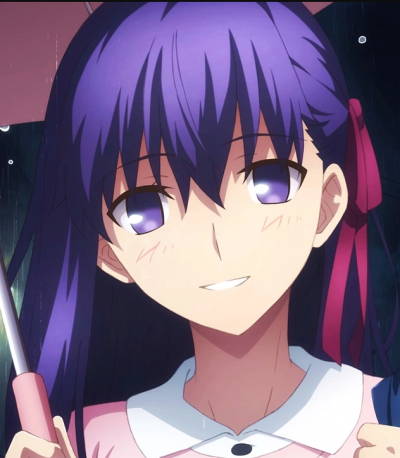 Sakura Matou is one of three main heroines of Fate/stay night and the "True" Master of Rider in Fifth Holy Grail War. She is also the Master of Avenger, Saber Alter, and the blackened Berserker in the Heaven's Feel route. Sakura is the younger, adopted sister of Shinji Matou and biological sister of Rin Tohsaka. She has a long-standing and obvious crush on Shirou Emiya, who sees her as family. After Shirou's confrontation with Shinji, Sakura would often visit Shirou's home to help him with his daily chores. Sakura is a young girl with violet hair, which she styles with a red-pink ribbon on the left side, and violet eyes. The ribbon she wears in her hair was given to her by Rin when they were children and is the first ribbon Rin ever made. Physically, Sakura is noted to have very "large breasts", with Taiga revealing she is an E-cup and had grown 13 cm since last year in an attempt to tease Shirou.[6] During school, she wears the standard Homurahara uniform. Her casual clothing consists of a pink cardigan, a white top, and a long cream-colored skirt. In ufotables' movie adaptation of Heaven's Feel, Sakura is seen wearing a long white dress with short sleeves and a black sash, and white sandals. She sometimes wears a pink cardigan or puffer jacket over top. In the Heaven's Feel route, her appearance changes when she becomes Dark Sakura. Her hair turns white and her eyes turn red, but she retains her trademark ribbon. She wears a long black dress made of black ribbons, that are trimmed in red. The length of the dress and the length of the ribbons it is composed of vary. In this form, her face, dress and legs are covered in red markings. Before Sakura was adopted into the Matou family, she resembled her sister, having had short black-brown hair and teal eyes. Shortly after her adoption, at most a year after, her hair and eyes took on their violet color, which is a direct result of Zouken's torturous training changing Sakura's body. Her clothing at this time consists of a purple dress, purple socks and black shoes. While Sakura is outwardly shy, soft-spoken and eager to please, she possesses a great inner strength. As noted by Shirou, she can also be openly stubborn at times. However, she is also prone to feelings of resentment towards others. Despite the cruelty she endures living with the Matou family, she is given a brief reprieve in Kariya, her adoptive uncle and the only person who genuinely loved her. When he dies in the Fourth Holy Grail War, Sakura mistakes Kariya's last attempt to free her from the Matou house as a warning from Zouken as the fate of those who disobey him. The incident cements Sakura's despair and resignation towards her own suffering. However, her own resolve is strengthened after she falls in love with Shirou Emiya and becomes closer to him by helping him with domestic tasks to express how she cares about him. During Fate/stay-night, she begins to feel isolated when she believes that Shirou is beyond her reach. Her strong feelings for Shirou is the most evident throughout the series compared to the other heroines; and is the main reason as to how they had little friction in desiring each other. Her inferiority complex makes her believe she is not fit for him, but after being chosen by Shirou as a love interest her feelings for him also come with strong jealousy whenever he compliments or spends time with other women, because she doesn't want to lose him. Prior to the strengthened influence of the Crest Worms inside her (which amplified her arousal), she would express either dismay or anger towards Shirou when he would bring up other women in conversations and in her low self-esteem she would misunderstand his words towards other women as confessions of attraction instead of platonic liking (such as when Shirou admits that Rider is beautiful while explaining his thoughts about her). Her jealousy sometimes comes out in other routes, but has been a recurring theme in her own route as being chosen by Shirou makes her mental fortitude unstable. When she becomes Dark Sakura under the influence of Angra Mainyu, her personality changes drastically; she becomes a devilish, evil, cruel, and extremely violent person. Sometimes she talks about herself in the third person. This personality occasionally shows itself during the events of Fate/hollow ataraxia but is less violent and acts more as comedic effect.