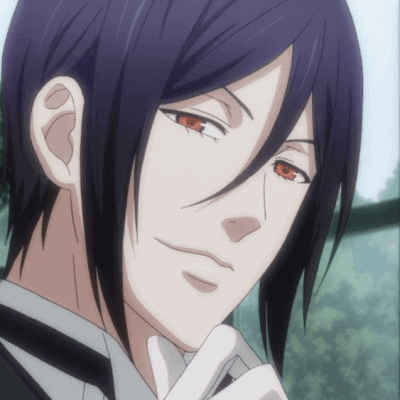 Sebastian Michaelis is the demon butler and a senior staff member of the Phantomhive household. Sebastian takes on the appearance of a tall, handsome adult with black hair, red eyes, pale skin, and black fingernails. The back of his left hand contains the mark of his Faustian contract with Ciel Phantomhive. Sebastian typically dresses in a butler's outfit, which consists of black trousers, a six-buttoned double-breasted tailcoat, and a gray vest; on is his shirt cuffs and tie is the Phantomhive crest. He also sports white gloves, a pocket watch, and a chained silver lapel pin bearing the Phantomhive crest, which is traditionally worn by the house's head butler. Details of Sebastian's demonic form include high-heeled stiletto boots, sharp claws, glowing fuchsia irises, slit pupils, and longer, sharper teeth, with dark wings and multiple eyes. Sebastian is devoted to Ciel Phantomhive. He faithfully carries out every one of Ciel's orders while ensuring that the Phantomhive household runs smoothly as the head butler. He does not sleep—demons deem sleep a luxury—and often spends his nights fulfilling his duties. He is sometimes critical of his master and how he treats his workers, but once admitted that he is not averse to the butler lifestyle despite the concomitant daily troubles. One of his quirks is that he always responds to Ciel's orders with the saying "Yes, my lord." Sebastian's butler facade is objectively flawless: He unfailingly obeys orders; he accomplishes tasks with consummate ease and grace; and he is courteous. Nevertheless, Sebastian is in actuality a callous and sadistic demon; he is ruthless when attacking others on Ciel's orders, and he occasionally puts Ciel in nonfatal danger for the sake of his own amusement. He usually behaves in a cavalier fashion when Ciel appears to be in danger, as he is confident in his ability to rescue him, but he may express concern when the situation grows precarious, such as when Angelina Dalles or Undertaker posed a considerable threat to Ciel's life. Sebastian is cunning and morally bankrupt, and he has no qualms about lying, cheating, and seducing others to gain the upper hand. He strictly adheres to his demon aesthetics and principles, one of which is not entering into multiple contracts, for he views such as inelegant. His paramount goal is to claim Ciel's soul. Sebastian is fascinated with humans and how seemingly insatiable they are, for they are willing to "drag others down to get what they want, even in death." In general, he regards them as "difficult creatures." Additionally, he has a great and mutual distaste for Grim Reapers. Sebastian views money as "rubbish" and "materialistic." He is fluent in French and Latin, enough to teach the latter. He is also proficient in Deutsch (German) and East Franconian, a dialect in Southern Germany. Moreover, he profoundly adores cats and once kept at least thirteen hidden in his wardrobe to prevent Ciel from finding out.