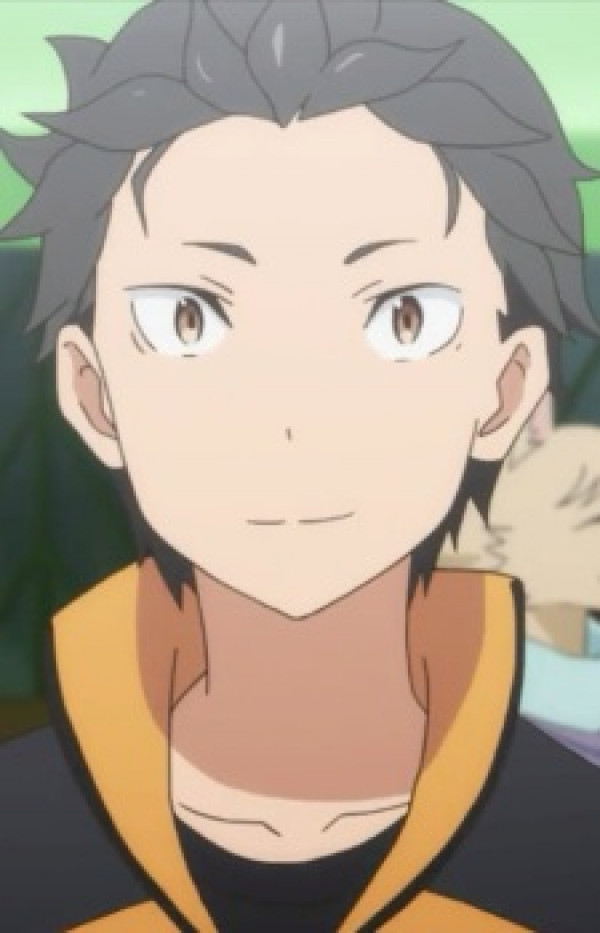 Natsuki Subaru is the main protagonist of Re:Zero kara Hajimeru Isekai Seikatsu. He was a hikikomori that was transported to Lugnica through unknown means, and given the ability to Return by Death by Satella. He officially became Emilia's knight and subsequently became a knight of the Dragon Kingdom of Lugnica (though he has no duties towards the Kingdom as the title was only granted to him so he could be given the right to officially become Emilia's knight), following the incident at the Sanctuary and is later revealed to have the necessary qualifications to become a Sage Candidate. Natsuki Subaru, as a Japanese teenager, was of Asian ethnicity. Of his two parents, Subaru took after his average-looking mother rather than his handsome father. His brown eyes, which were inherited from his mother, had small irises that made the whites of his eyes stand out,due to his sanpakugan. Unfortunately, inattentive people found Subaru's eyes to look intimidating, although some such as Emilia liked them. One trait he did take from his father was his medium-length thick black hair which was swept back and fairly unkempt. In Japan, Subaru had tended to his hair personally, no doubt contributing to its disarray. Due to traits such as his short ears and flat nose, Subaru wasn't considered especially attractive or unattractive. Back in Japan, he was the kind of person who would fit in perfectly with a crowd because of his complete lack of any outstanding features. As a shut-in who had nothing better to do all day, Subaru used to train his body, resulting in a physique that was slightly muscular yet not too much. He stood at five feet and eight inches tall, which was roughly average height. Subaru's most common choice of clothing was the cheap outfit he was summoned in. The ensemble consisted of deep-grey tracksuit bottoms with an orange stripe down the side, black sneakers with vibrant orange laces and soles, and a black t-shirt. Additionally,Subaru wore a zipped-up white tracksuit jacket with a stand up collar, deep-grey sleeves with an orange line running down their sides and orange cuffs, and deep-grey shoulders. On the left breast of the jacket was a black brand symbol that was reminiscent of the letter "N." During the events of Arc 5, Subaru's right arm and leg were infected by Capella's Black Dragon Blood, thus wrapping a bandage around his leg to hide the wound. During his adventure in the Pleiades Watchtower in Arc 6, Subaru wore an outfit better suited for travelling. The outfit in question consisted of an orange scarf that matched the color featured on his track suit, black trousers tucked into lighter brown boots with black lacing, a black shirt that matched the shade of his trousers, a light brown buttoned blazer worn atop the shirt that ensured that only the shirt's collar was visible, a brown belt matching the shade of the boots, and an open green jacket. He also occasionally wore a long black hooded cloak alongside the outfit. In the Sloth What-IF story, where Subaru chose to abandon Emilia to run away with Rem, Subaru's hair was longer. Although he kept his basic messy hairstyle, Subaru now had a clump of hair tied up in a ponytail, apparently influenced by the style of Wilhelm van Astrea. While Subaru tends to not read the situations he encounters, ultimately leading him to make irrational decisions, he is loyal to those he holds dear, willing to help them, even if that means taking the thorny path. He has his resolve confirmed through the many situations and circumstances he faces in the fantasy world, originally having been one to always take the 'easy' route. As a shut-in NEET, he is hopeful of the possibilities that being sucked into a new realm brings, but later realizes the realities of the predicament he is in. Eventually, he resolves himself to be faithful and protective of the ones that he cares most about. Beneath his eccentric demeanor, however, Subaru is actually a very insecure person suffering from a severe inferiority complex due to growing up in his father's shadow. This also caused him to develop a fundamental misunderstanding of relationships where he believed he would be abandoned if he wasn't the center-of-attention. Even his otaku-tendencies were really just another method he used to stand out. Ironically, though, these desperate attempts to connect to others only caused him to make a fool of himself and push others away. It wasn't until he was transported to Lugnica that Subaru finally met people who accept him for who he is and he began learning how to build genuine relations.